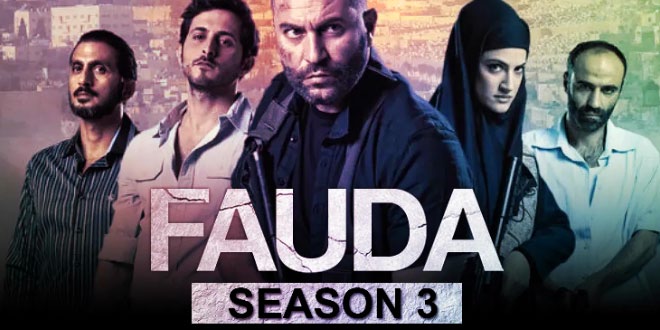 Fauda is an Israeli television series developed by Lior Raz and Avi Issacharoff drawing on their experiences in the Israel Defense Forces. The series premiered on February 15, 2015. It tells the story of Doron, a commander in the Mista’arvim unit and his team as they pursue a Hamas arch-terrorist known as “The Panther.”

The first season was filmed in Kafr Qasim during 2014 Israel–Gaza conflict. It premiered on February 15, 2015.

Fauda’s new season, third to be exact, is back on Netflix. So is its hero Doron Kavillio (Lior Raz), part menacing, part sexy (watch the girl cavort him). Clearly, neither he nor the Israeli series have lost any of its bite or cutting edge. Sure like with most series, seasons do follow a similar template. Once again ruthless Israeli intelligence agents are pitted against terror networks owing allegiance to Palestinian cause.

What the members of undercover wing of Israeli Defence Forces (IDF) do and how they manage to get the better of the enemy remains the fulcrum around which Fauda hinges, moves forward and engages.

Only this time, over Doron, masquerading as a boxing coach, infiltrates the family of a terror operative. Like the previous season, his operation not only leads him to his target but also extracts an unwarranted price. Inadvertently, he sets a chain reaction and an innocent young boy on the path of terror.

In fact, what sets Fauda (meaning chaos in Arabic), apart is that despite showing little mercy to terrorists, it doesn’t go all out to demonise them. If terrorists are merciless, even more so are the agents. Yes in such conflagrations, there is collateral damage and much of the blame for that lies on the doorsteps of intelligence agents as well. Yet while Doron does not flinch to kill, he has a heart that not only beats for his children, but also the very people he betrays. Emotional heft, the psyche of a sniper killing a man on his own side and much more, add inflections to the narrative in this actioner.

Meticulously and realistically shot, action sequences are razor sharp and keep you on the edge of your seat for most of its run time. Whether it’s the ace sniper taking shots or point blank firing, technical finesse is of superlative quality. Remarkable is the execution of action that wanes only to pick its ebb again and again.

The opening episode might take a while to warm up, primarily to establish a few characters, especially Bashar and his father who has just come out of the prison after 20 years. Thereafter, the pace picks up and the momentum of the series rarely flags, and leaves little room for dullness. Every other scene is packed with adrenalin-pumping sequence. The prologue before the casting titles is as enthralling as the climax of each episode in the 12-episode binge-worthy series.

As the father-son, Jihad and Bashar (Ala Dakka) take two Israelis hostages and as Doron and other team members are on their trail, the plot may have bits of formulaic twists and turns. But the nail-biting suspense holds. Except for minor digressions like Doron’s escapades, Fauda remains on track, not losing its rhythm ever.

Worth your time, it takes you right in the centre of combat zones of the Israeli-Palestinian conflict. From West Bank to Gaza as enemies on both sides come face to face, the face-off has more than one interesting dimension. Clearly, there is method in this chaos and one that ensures it has all your attention.

A bit of information that should also grab your attention is — the 48 year old hero Lior, one of the show-runners, apart from serving as a commando in the elite undercover counter-terrorism unit, also worked as Arnold Schwarzenegger’s bodyguard. Besides, he lost his girlfriend to an Arab Palestine terrorist attack. Perhaps, that explains his spot on act with penetrative eyes which dart around and express like deep pools of ocean. Rest of the cast, especially Yaakov Zada Daniel as Eli and Ala Dakka as Bashar, anchor and steer the series further to a dramatic and tragic finish.

Since violence begets violence, innocents will continue to be held to ransom; the final thought is as turbulent as the turbulence the series captures.