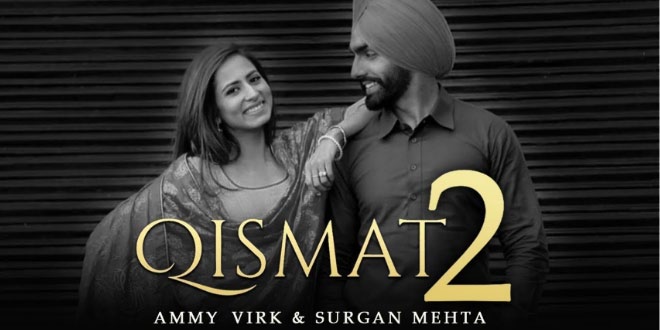 Qismat 2 is a 2021 Indian Punjabi-language romantic drama film written and directed by Jagdeep Sidhu. The film produced by Ankit Vijan and Navdeep Narula has been bankrolled by Shri Narotam Ji Productions and Zee Studios. Starring Ammy Virk and Sargun Mehta, the film is a sequel of 2018 film Qismat.

Principal photography of the film began on 17 October 2020, with a muhurat shot. The film was released theatrically on 23 September 2021.

The film was conceived after the success of Qismat. In an interview director Jagdeep Sidhu told that film team was working on to bring another film as good as last one. This team including Ammy Virk, Sargun Mehta, Jagdeep Sidhu, Jaani and B Praak is planning a sequel. Mehta shared a post on Instagram that Qismat 2 is on the way. In May 2019, Sidhu confirmed the sequel with same crew. In July 2019, Virk also confirmed the film on his official social media handles. On 11 September 2019, Sidhu released the title poster of Qismat 2 with the release date as 18 September 2020. The script was ready by first week of July 2020. Due to COVID-19 pandemic the shooting of the sequel was delayed. Finally the filming began on 17 October 2020.

Soundtrack of Qismat 2 is composed by B Praak, lyrics by Jaani and the songs are sung by B Praak, Nooran Sisters, Afsana Khan, Ammy Virk ,Asees Kaur and Romy. The soundtrack is released on Tips Punjabi.

Shiv and Bani are college students and the former is a badminton player who wishes to excel in the sport, even though his father would like him to get a job and help with their dire financial situation. Bani helps Shiv understand that instead of getting a low-level job now, he can study hard and make something of his life. She also teaches him the meaning of friendship. Shiv falls in love with her but despite his dedication to her, she decides not to go against her family and gets married to Kaabil. Shiv, meanwhile, continues to pine for her. A few years later, an unexpected turn of events reunites the duo.

Punjabi Film Industry has surely witnessed the sequel of various superhit movies, but the level of hype for Qismat’s sequel stays unmatched. The most awaited sequel in the history of the Punjabi Film Industry, Qismat 2 is finally released today after being postponed from a long time. The lead starcast of Qismat 2 remains the same as in Qismat. The movie features the favorite on-screen couple Ammy Virk and Sargun Mehta as the leads, while Tania and Jaani will be seen playing the supporting leads. Apart from these, Qismat 2 also features actors like Hardeep Gill, Rupinder Rupi, Amrit Amby, Hardeep Gill, Satwant Kaur and more in various roles.

Heading towards the story of Qismat 2, we are glad to witness this extremely beautiful Love Triangle. And to your surprise, with four main characters in it, this movie actually involves two love triangles, which can also be considered as an unpopular concept of love square. Baani and Shiva played by Sargun Mehta and Ammy Virk are two college friends, where Baani is a daughter of an SP in Punjab Police, and Shiv is a son of a poor father. While Baani is a fun-loving and modern girl who believes in the magical bond of friendships, her complete opposite is Shiva who is super dramatic, aspiring to join Punjab Police and has faith in the typical of Bollywood which says, ‘A boy and a girl cannot be just friends’. Also Shiva’s best friends played by Balwinder Bullet and Amrit Amby are his two partners in crime who convince Shiv to believe that Baani is into him. As a result, Shiv also plans to impress her so that her father can get him into Punjab Police. But eventually, he ends up really falling for Baani. And as already revealed in the title track of the movie ‘Qismat 2’, Baani ties the knot with Kabil (Jaani) and what happens next is exactly what makes the movie worth watching. The plot of the movie will also introduce ‘Tania’ as a happy, chirpy girl but what exactly her role is, it is something that we cannot reveal, because it will prove as a big spoiler. All that we can reveal is the fact that the movie can be considered as the best example of ‘rom-com’ because it makes you laugh like never before, and also makes you shed tears like never before, yes even not in Qismat.

After Jagdeep, the persons who slipped in our list of appreciation are the lovely leads, Ammy Virk and Sargun Mehta. Team Kiddaan considers Ammy Virk as the Versatile Virk of the industry because we are 100% convinced that there is nothing related to entertainment that he cannot do. In this movie, his character was of a true lover who reaches the ultimate level of love, where after betrayal you feel happy at your loved one’s loss. And mark our words, there is a scene where Ammy Virk will be seen flaunting various emotional expressions on his face and sets a new benchmark of acting and expressions. On the other hand, Sargun Mehta has surely come a long way and we are extremely delighted to witness her beautiful journey in which she has undoubtedly become the finest actress of the Punjabi Film Industry. From Dialogue delivery, expressions to her body language, there is no actress who’s even near her skill level. And we cannot ignore the acting debut of ‘Jaani’. Though he plays a supporting role, with no dialogues (Yes, Jaani has no dialogues in the movie), his character has a powerful impact. And Tania acted like the usual stunner she is. Her bubbly character will make you fall in love with her and also we cannot get over her exclusive look.

Also, when we are talking about the actors, we need to mention Balwinder Bullet and Amrit Amby because they were the two characters who had the responsibility to make us laugh like a 3-year-old.

Apart from the story and the amazing and remarkable performances of the actors, there are various other small detailed points in the script of the movie which makes sure the audience is hooked to it throughout. Be it the ‘Discovery references’, or lightly highlighting the taboos of society, Qismat 2 has a lot to offer. This movie stands out as a complete entertainer.

Also the music of the movie, which we believe you have already witnessed and loved, makes the movie an even prettier bliss for the fans’ eyes and ears. And as they say, if the music of a movie is a hit, the film can be considered as an evergreen one.

But the only point which could have been better to make the movie flawless, is the beginning of its second half. It’s a little slow and as a result the audience loses their interest. But we are happy that after some time, the screenplay slowly paced up and Qismat 2 was again on track.

And in conclusion if we compare Qismat 2 with the 2018 released superhit movie Qismat, we believe its sequel has stood at par with our expectations. And in fact this time it’s even better with a level up of the romance, amazing comical points, most importantly the emotions that Qismat has always been known for.

So, we can suggest to carry a box of tissue paper along with you when you head to watch it, because it’s going to make you cry not once, not twice, but surely countless times. You should watch the movie, because it is a must watch without any second thoughts.