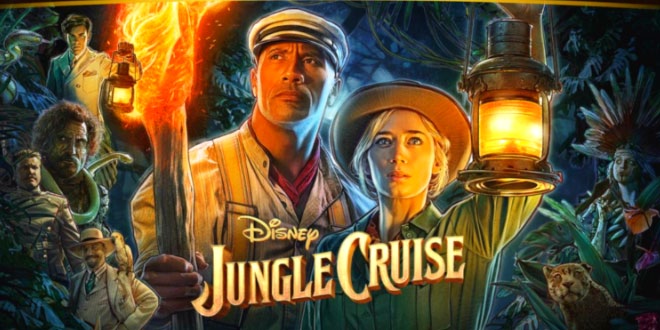 Jungle Cruise is an upcoming American adventure film based on the Disney theme park attraction of the same name. Directed by Jaume Collet-Serra, the film will star Dwayne Johnson, Emily Blunt, Édgar Ramírez, Jack Whitehall, with Jesse Plemons and Paul Giamatti, and is set for release on July 24, 2020, by Walt Disney Pictures.

Set during the early 20th century, a riverboat captain named Frank takes a scientist and her brother on a mission into a jungle to find the Tree of Life which is believed to possess healing powers. All the while, the trio must fight against dangerous wild animals and a competing German expedition.

In September 2006, it was announced that Jungle Cruise would be developed for Mandeville Films, with a script by Josh Goldstein & John Norville, rewritten by Alfred Gough and Miles Millar, loosely inspired by the theme park attraction of the same name. Details have not been forthcoming, apart from confirmation that the film is set in the twentieth century.

In February 2011, it was announced that Toy Story stars Tom Hanks and Tim Allen would star in the long-gestating film, with a script to be written by Roger S. H. Schulman.

In December 2018, it was reported that actor Jack Whitehall’s character would be homosexual and would have a coming out scene in the film with Dwayne Johnson. This would be the second incidence of a gay character in a Disney film, the first being Le Fou, portrayed by Josh Gad, in the 2017 live-action adaptation of Beauty and the Beast. There was some backlash over the report, with a few expressing outrage over a straight man being cast as a “camp” gay character.

On August 9, 2015, it was announced that Walt Disney Pictures was redeveloping its film adaptation based on Jungle Cruises, to star Dwayne Johnson. The script will be written by John Requa and Glenn Ficarra, and the film will be produced by John Davis and John Fox. The film is intended to hark back to its period roots. In April 2017, Johnson expressed his interest in having Patty Jenkins helm the project. In July 2017, Jaume Collet-Serra was announced as the director of the film.

Principal photography began on May 14, 2018, in Hawaii. Filming wrapped on September 14.

On January 23, 2019, it was announced that James Newton Howard is set to compose the score for the film.

Jungle Cruise is set to be released by Walt Disney Studios Motion Pictures on July 24, 2020. The film was originally scheduled to be released on October 11, 2019, but on October 19, 2018, Johnson announced on behalf of Disney that the film had been delayed to 2020.

On October 11, 2019, a first official trailer and a teaser poster were released.

The Pirates of the Caribbean hangover is so strong with Jungle Cruise that it almost makes you wonder if Dwayne Johnson swiped Captain Jack Sparrow’s stash of rum and had himself a jolly old time before filming. But outward similarities aside, the new Disney film is a reminder of how dramatically the Hollywood landscape has changed in the years since The Rock replaced Johnny Depp as the world’s biggest movie star.

The Pirates trilogy was perhaps the last time that Disney was willing to get legitimately freaky. We often forget just how bizarre the three Gore Verbinski movies were, but both mainstream movie making and audience preferences have changed in the last decade. Gone are the days when a scoundrel such as Jack Sparrow could lead a multi-billion dollar film franchise, and we must now deal with whatever version of himself that Dwayne Johnson is comfortable projecting on screen.

He plays the swashbuckling sailor Frank Wolff in Disney’s latest attempt to spawn a franchise. And because of the film’s massively delayed arrival at our shores, you will watch Jungle Cruise with the knowledge that a sequel has already been green-lit. This is neither an indication of the film’s popularity or quality. Jungle Cruise is, by most standards, merely passable, but this has become the overwhelming sentiment you’d associate with Disney movies these days.

It lacks the heart of some of the best Marvel adventures — the recent Shang-Chi and the Legend of the Ten Rings was a fine example of how emotion could be carved out of the same mould — but it isn’t nearly as cynical as Black Widow. Jungle Cruise lies somewhere in between, elevated by its occasional bursts of energy and Johnson’s relentless charm, but undone by some rote character work and surprisingly sloppy visual effects.

The film is at its best when it allows great character actors like Jesse Plemons and Paul Giamatti to shine. Both performers make consistently interesting choices, and it’s so heartening to see director Jaume Collet-Serra be so encouraging of them. Because his star is, as usual, utterly unwilling to take risks.This was exactly what was wrong with the recent Ryan Reynolds-starrer Free Guy. It almost reminds you of Bollywood, where movies are tailored around an actor’s public persona and not really concerned with pushing the envelope. It was a far more interesting time for movie stars a decade ago, when the likes of Leonardo DiCaprio and Denzel Washington were ruling the roost.

In Jungle Cruise, The Rock has the look of Popeye the Sailor Man and is given an ‘entry shot’ that would make Varun Dhawan envious. That doesn’t sound like progress to me.

And perhaps because there is so much of it, the film’s CGI has a noticeable artificiality that is quite unusual these days, especially when you consider the very real possibility that the VFX-heavy action sequences in this movie were set in stone well before a script was finalised. Gooey visual effects aside, the action is admittedly one of the film’s highlights; it’s impressively staged, directed with tremendous enthusiasm, and slathered with the secret sauce that makes scenes like these pop: character moments.

We learn more about what kind of person Frank is — more Han Solo than Indiana Jones — in moments of peril than in the scenes designed to deliver exposition. In fact, one of the few scenes in which Jungle Cruise pauses for a pitstop and focuses on Jack Whitehall’s character comes across as shockingly tone-deaf. It’s one of those moments in which Disney pretends to be more progressive than it actually is, settling, as usual, for queer-bating. Had they any real pride, they wouldn’t have beaten about the bush in this fashion.

And that is sad, because as far as comic relief characters go, Whitehall plays a particularly funny one. Those of you that have seen his Netflix travel show would recognise that he is essentially playing a version of his father — a spiffy English gent who for the life of him doesn’t understand how he keeps getting involved in adventures. The crucial difference this time is that Whitehall’s character, MacGregor, goes along for the ride of his own volition. It’s sweet how he sticks by his sister, the feisty Dr Lily Houghton (Emily Blunt), simply because she supported him when he needed it the most.

Jungle Cruise isn’t as ambitious as recent Disney tentpoles — films like The Lone Ranger and Tomorrowland — and watching it at home undoubtedly makes it 30% worse, but it’s still a refined piece of Hollywood moviemaking, and for its audience, that will be enough.