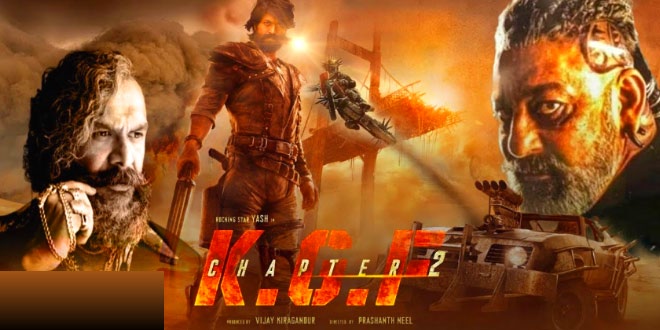 KGF: Chapter 2 is an upcoming 2022 Indian Kannada-language period action thriller film directed by Prashanth Neel which is a sequel to the 2018 film KGF: Chapter 1 and stars Yash, Sanjay Dutt, Srinidhi Shetty, Raveena Tandon and Prakash Raj in lead roles. Initially scheduled for theatrical release on 14 April, 2022, the film was postponed due to COVID-19 pandemic. Being the most expensive Kannada film with a budget of ₹100 crore (US$14 million), the film will be dubbed in Hindi, Telugu, Tamil and Malayalam languages.

While Yash and Srinidhi Shetty have reprised their respective roles, Sanjay Dutt has been cast as Adheera, the main antagonist. He compared his character Adheera to Thanos, and revealed that it was “shown to be a dangerous character with scary makeup” and added that it was a role he was looking for. Media rumours that Raveena Tandon would appear in the film started making rounds as early as February 2019. A news report in The Times of India confirmed that Tandon will be seen in a “major role” in the film. In August 2020, when the filming resumed, Prakash Raj was also revealed to be playing an important character.

Ravi Basrur is again composing the music. Award-winning cinematographer Bhuvan Gowda is handling the photography direction of the film.

Filming for KGF: Chapter 2 started in March 2019 in Hyderabad with a small part of the film having already been shot during KGF: Chapter 1, and after an initial round of filming near Bangalore, shoot commenced in August 2019 at Cyanide Hills in Kolar Gold Fields. Filming was stopped in March 2020 due to the Coronavirus lockdown in India, before finally resuming on 26 August 2020 at Bangalore post a gap of 5 months and ending in December 2020 at Hyderabad. Climax action scenes of the film were filmed in December 2020 at Hyderabad.

Teaser of the film was released on 7 January 2021. Within few minutes of the release, the teaser became the number 1 Twitter trend.

The high-octane actioner, KGF Chapter 2 is a typical masala entertainer with spectacular cinematography and heavy-duty dialogues

The feat that 83 couldn’t achieve—that of drawing the audience back to cinemas—Rocky aka Bairya aka Messiah has done with KGF Chapter 2. As many as 165 shows in tricity alone, on the opening day, and each going houseful, speaks of the mania that KGF has generated! Cinema parking packed to queues of children to youth to seniors rushing for entry; it was as if one was back to days of Raja Hindustani and Border!

After setting the ball rolling with KGF Chapter 1, in this one Rocky is back to the Kolar Gold Fields with his larger-than-life avatar. Even though it took three-and-a-half years after the first installment, the audience was still eager! Running an empire is this Robinhood who has tentacles spread all over country —Mumbai, Delhi, Bengaluru, Kochi, Ahmedabad and even Chandigarh. Right from owning Mumbai to influencing the government to his might in Middle East, Rocky keeps true to the people who made him the sultan. Every miner in Rocky’s raj has food, clothing and a house, so they are ready to sacrifice everything for their hero.

Rocky is the poster boy of hyper-masculiniy —a lord who needs ‘entertainment’ in his ‘woman’ or at least says so. At the same time, he’s so moral that he wouldn’t share a room with her till they are married. As he runs his empire, buying Kalashnikovs and setting up the supply chain of his gold biscuits, his rani overlooks papads being dried and reads a book—comfortable amongst gun-wielding goons!

The story is built on avarice, as this preacher of greed wants to rule the world. He has his redeeming features though; he is a caring spouse who gets a helicopter to help his lady love cool down! He is a good son, who makes his father pay for the mother’s suffering and a relentless business tycoon, who takes care of all his workers.

Of course, it’s an over-the-top action drama. This hero can enter the Parliament and shoot a leader, and a Prime Minister can mobilize Indian Air Force, Army and Navy to beat the biggest goon ever or the most terrific businessman—whichever side you take.

The acting is to the point— Yash, Srinidhi Shetty, Sanjay Dutt, Raveena Tandon, Prakash Raj and even the support cast enact their parts well. Yash is as comfortable with his mining tribe as much as dealing with a sheikh or buying automatic guns or modelling in his bright suits, never leaving cigarette or alcohol! Heavily tattooed, braided Sanjay Dutt, as Adheera, is menacing. Prime Minister Ramika Sen (Raveena Tandon) delivers her part well.

In this highly stylized mass entertainer, spectacular cinematography by Bhuvan Gowda and slick action by Prashanth Neel take the cake. Heavy-duty dialogues make the audience scream and cheer—‘Violence…Violence…Violence…I Don’t Like It, I Avoid…But…Violence Likes Me, I can’t Avoid…’ There is more than one build-up that keep you invested, background music heightening the effect, but at times too loud to mask conversations.

Action is commendable—bikes, jeeps, planes to ships —presenting breath-taking sequences. Hand-to-hand combat and sword-hammer fighting is impressive. VFX is top-notch too. The birds, planes and vehicles moving about afford stunning visuals. The film is dark— after all it is set in the mines, even if the new khuda of is pro-development.

It’s the screenplay, flitting between the present and past, that keeps the audience invested and we know for sure that KGF’s Chapter 3 is going to bigger and better! Prashanth Neel builds this world and delivers a hit, and that too for audiences in Kannada, Telugu, Tamil, Hindi and Malayalam!