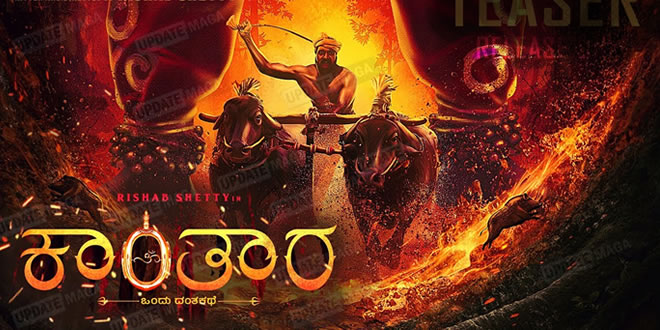 Kantara is a sports drama movie written and directed by Rishab Shetty. The movie casts Rishab Shetty in the lead role. The film is produced by Vijay Kiragandur under Hombale Films banner.

The directorial venture of Rishab Shetty has been wrapped up except for a song sequence; the film is already in the post-production phase.

The theatrical teaser of Kantara, directed by and starring Rishab Shetty, was screened along with KGF Chapter 2 on April 14, which has garnered an immense response. The teaser gives a peek into human and nature conflict and also highlights Kambala sport.

The makers have now shared a still with CE featuring the lead actor in a Kambala sequence. Rishab has wrapped up the shooting for Kantara except for a song sequence, which will be shot during the rainy season. Meanwhile, Rishab has now got into the post-production work for Kantara, which in all likelihood will be released by the end of 2022.

The Kannada film is produced by Vijay Kiragandur under the Hombale Films banner. Sapthami Gowda, who previously made her debut with Suri’s Popcorn Monkey Tiger, plays the female lead in Kantara. The film’s cast comprises Kishore, Achyuth Kumar, and Pramod Shetty in prominent roles.

Aravind S Kashyap is the director of photography. Ajaneesh Loknath will compose the music and background score for the film. National award-winning stunt master Vikram Mor, who worked in KGF Chapter 1, is part of the project.