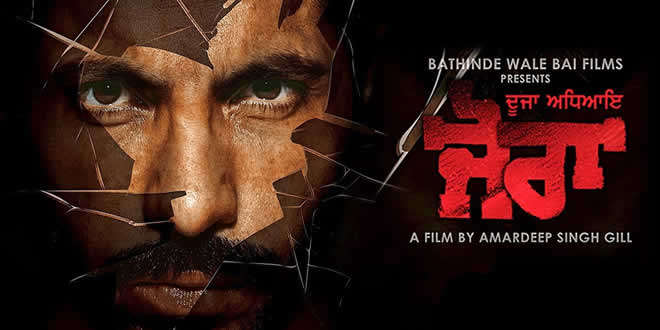 The complex web that connects Punjab’s local gangsters, policemen and political leaders. Jora takes his story further than ever before as he steps onto the path of becoming a political leader.

As the title suggests, this is the second part of Jora series. This film, an action, thriller, political drama with crime sprinkled all over, explores the life of Jora, played by Deep Sidhu. In the previous installment, we had met a young boy, who has a traumatized childhood because of the corrupt system. He is pushed into becoming a notorious gangster to seek revenge for his family that gets destroyed at the hands of deceitful law and order.

Deep Sidhu looks intense in this one, even more than the last time. His dialogue delivery is filled with seriousness and emotions. His expressions at some points don’t do justice to them, but you can let it pass because the way he speaks is quite convincing.

There are Mahie Gill, Japji Khaira, Gugu Gill and Singaa in important roles. Mahie plays a good cop, Japji is a politician, Gugu Gill is a veteran in politics and Singaa is a young boy fighting elections in Panjab University. He has an arch rivalry with Deep Sidhu.

Unlike Punjabi movies, Jora is dark and subtle at the same time. Every scene, the turn of events, the detailing in picturisation keeps you on the edge of your seat. It may be another flick highlighting the ‘dirty politics’ and how passionately people in the game go about all unrighteous acts, but the way it is shown makes all the difference. It reflects the creativity involved in presenting the ordinary. The screenplay is very strong and the dialogues are as powerful, most having an underlying reference or meaning.

Mostly shot in villages and parts of cities, including Chandigarh, the cinematography is grand, bigger that Jora 10 Numbaria.

There is a fight between good and bad, within the system, among politics, involving the judiciary and common man. But here again, good and bad both are relative; subjective to each of the characters. If Jora is the revolutionary, he is first the gangster, and to promote his cause he steps onto the path of becoming a political leader. The film is layered. It attempts to reveal the complex web that connects gangsters, policemen, politicians.

Although the film is about Jora, the way every character has played their role is remarkable. Mahie Gill as a senior police officer is so virtuous and justifiable; Japji Khaira is a pro at playing politics and pulling the strings, unabashedly; Gugu Gill as a Haryanvi politician is mind blowing. The way he speaks, no one can think it’s a Punjabi man speaking another language. And Dharmendra, the superstar, in just one simple dialogue, sends forth the meaning of statecraft loud and clear.

Since the movie is full of suspense, literally in every second scene you would go-what next, without letting out much we would say it is a treat for those, who watch cinema as a craft. And those who have interest in the system and its politics will relate to it in many ways.