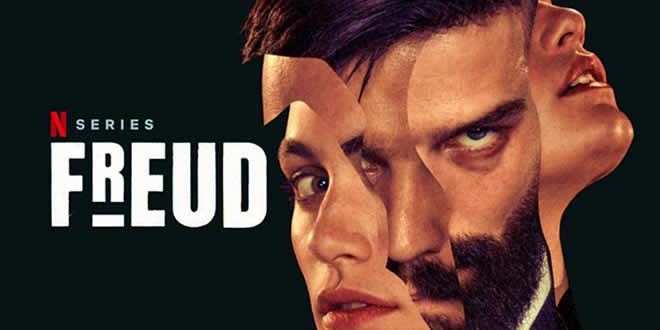 Freud is an Austrian-German crime television series re-imagining the life of a young Sigmund Freud. 8 episodes have been produced, with the first series airing on 23 March 2020 on Netflix.

Sigmund Freud, one of the most enduring and fascinating figures in the field of psychology, whose name spawns a host of images and concepts, Id, ego, superego, Oedipus complex… much is credited to the man also known as the founder of psychoanalysis. So, when a series comes featuring his name in the title, you are automatically drawn to it. Freud, a German Austrian show, currently streaming on Netflix, by no stretch of imagination is a biography.

Some details of him being an Austrian Jew, and the names of his family members, are on the dot. His depiction (enacted exceptionally well by Robert Finster), as a cocaine snorting doctor is not far from truth. He did advocate the use of cocaine as an analgesic and stimulant. But Freud, the series, is largely a fictional account set in Austria. The purpose here is to bewitch, titillate and ensnare you in equal measure.

Sex, violence and nudity are not just three cautionary words that appear on the top of the screen before the eight-episode series begins. Much here is graphic, even revolting. The séances and other blood-soaked rituals are likely to raise your hackles. But once you overcome your discomfiture, much fascinates too.

Freud unspools primarily like a horrific thriller. Wrapped around murders, concepts like Táltos taken from Hungarian mythology figure prominently in a series that you deem should ideally be about reason and logic. A lot of the on-goings in this dark, complex conspiratorial tale of a Hungarian countess and her adopted daughter Fleur Salome (Ella Rumpf suitably psychic) appear unscientific. But Freud lived in a time when hypnosis was more of witchcraft than a psychological tool to cure people. And. subconscious, central to Freud’s theory, was unheeded and un-recognised.

Too much reference to totems and Táltos in the series with episodes, otherwise named after Freud’s concepts such as catharsis and suppression, might be off-putting. But study of ancient mythology and contemporary ethnography did serve as comparative material for the neuroscientist. Between the X rated images, especially in the episode Totem and Taboo, Freud’s insights about the conscious mind and the tricks that the subconscious can play on its working do impregnate the series.

Many a one-liner such as, “My conscious is the solitary light. All else is in shadows,” are just the wisecracks, needed to propel this narrative that is as much about sex and murders as about psychology. A lot sticks out like a sore thumb too. While one can comprehend Freud’s obsession with Fleur who anyway is being used as a bait to seduce the enemies, the means he adopts are more sleuth-like than behoving a doctor. But then, facts are not the strong-points of Freud the series.

Sexual images, of course, might be forgiven in a series that reimagines, Freud who told us about forbidden desires and their power to shape us. One of the key moments is when Fleur, split into varying personalities, is told by him to decide which one she wants to be. The refrain, “You have the power to choose”, too is meaningful. The power of hypnosis and finally the ability of dialogue between doctor and patient to cure are driven home. What finally stays with you is how you can be what you desire deep within.

Certainly, the series has you striving for more and that is its biggest triumph. Never mind that it does not satisfy your curiosity about Freud. Rather, it whets your appetite to learn and know more about him. Thus, this Netflix original is more of a teaser as far as Freud the real person is concerned. But if you have an appetite for a bit of gore, thrill, mystery, explicit sex packaged in the garb of a real persona, Freud is just for you. If you want more, it might set you on the path to discover the real Freud. Or maybe, the second season would take us enroute a more accurate revelation.