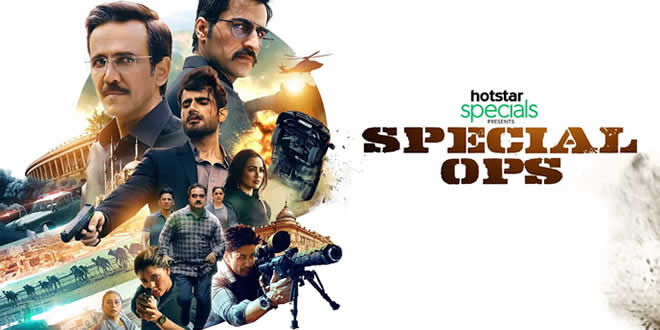 The series follows Himmat Singh (Menon) of Research and Analysis Wing who draws similar patterns in terrorist attacks and is convinced a single person is behind all the attacks. His task force team of five agents living in various parts of the world aim to catch the mastermind. The story is inspired by several espionage missions undertaken by India in the last two decades.

With A Wednesday and Special 26, Neeraj Pandey proved his mastery over the cat and mouse game and with Baby, also an Akshay Kumar-starrer, he upped the spy thriller quotient. Now, with his latest web-series Special OPS, streaming on Hotstar, he takes us into the world of R&AW and its undercover agents while building on his favorite genre.

Inspired by true events yet taking a flight of fancy like many of his film projects, much is fantastical. Beginning with the 2001 attack on Indian Parliament, it works on the conspiracy theory that the mastermind of the attack, a mystery sixth person, was never found. On the heels of this sixth conspirator is an earnest R&AW officer Himmat Singh (suitably etched by Kay Kay Menon). How in his nineteen long years of search to find him, he neither loses patience nor his objective, which might seem a tad too artificial.

But Pandey who has also co-written the series has a fairly good insight into the working of our intelligence agencies. Net result, he does weave a well-scripted and engaging drama.

Technically, the series rests on high ground. Slick with lush production values, moving from one foreign locale to another where a team of agents are well in place, the series does not move at a frenetic pace. Yet it keeps you glued, if not always on tenterhooks. The drama unfolds as much in the inquiry room as on ground zero.

Himmat’s expenses of Rs. 28 crore for spy activities are under the scanner and the ensuing audit investigation takes you back and forth in time. From the Parliament attack to present day, it touches upon 26/11 as well. One crucial scene even includes Ajmal Kasab. As with his previous forays, Pandey shows little mercy for terror / terrorists. There is no ambivalence in his approach. The tagline goes dhoond ke maarenge and the search for terror module is as ruthless as the mastermind of terror. Though largely a fictional account, it remains an ode to our undercover agents as well as the R&AW. Finally, it does increase our respect for our unsung heroes and heroines too. Yes, women get some space, not just as the understanding proud wife Saroj (Gautami Kapoor), Meher Vij and Saiyami Kher are undercover spies. However, it is Karan Tacker as Farooq and Menon’s Himmat who hog the limelight. Both have done a wonderful job.

Tacker makes for a dashing spy and Menon brings the necessary heft and gravitas to his part. Vinay Pathak as inspector Abbas once again reminds us what a fine actor he is. Sajjad Delafrooz, a UAE-based Iranian actor, too is charmingly devious as the antagonist and impresses as much as he did in Tiger Zinda Hai. Only unlike The Family Man expect no layering to his character. Besides, filmy touches (we are not just talking about the names of the eight episodes based on iconic films such as Kaagaz Ke Phool) and flimsy twists too abound. The one involving Divya Dutta’s character of Sadia is intriguing. But the final turn isn’t quite. Same goes for many such dramatic flourishes, which are rather contrived.

Surely, Pandey and Shivam Nair have no hesitation in showing how communal riots push innocent Muslims on to the other side. But his heart and the series’ beat only for our heroes, beyond the religious divide. Certainly, the series, despite hovering around a clutch of agents, is not multilayered. Watching it, you may not have your heart in your mouth all the time. But it is a thrilling account nevertheless. Like the sniper Avinash (Muzammil Ibrahim) who can only see his target, Pandey’s vision may not be all encompassing but hits the target and is on point.

The best part of the series; it is not encumbered with heavy duty erotica. But for a few expletives, it makes for family viewing, riveting at that. May be not on par with The Spy, the remarkable true story of Israel’s most prominent spy Eli Cohen or our very own The Family Man, yet this desi slice of spy fiction is more than watchable.