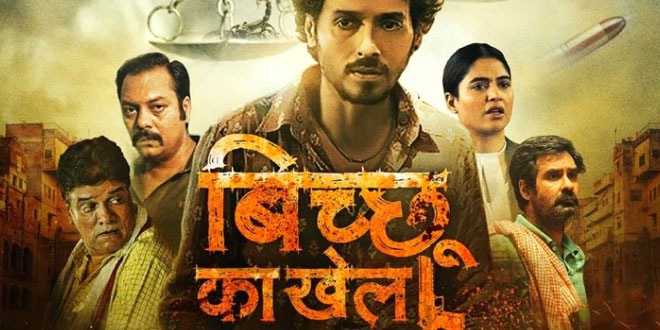 What happens when a young student loses his father to a cover-up? Can he find it in himself to forget the past and move on, or is revenge the only thing that can give him some peace of mind?

A crime-drama with a dash of quirkiness. Set amidst Banaras (Uttar Pradesh), the show narrates a tale of a mastermind, Akhil who escapes the system despite committing the murder that takes place at a college festival. Bicchoo Ka khel depicts Akhil’s story who has one crucial mission- to seek revenge for his father’s death. But what happened to his father? How does Akhil plan on getting revenge for his death? How does he twist the system to escape unscathed despite committing the crime? Find out the answers from Akhil himself. Watch online exclusively on ALTBalaji.

Akhil experiences a complete life transformation when his father is framed and killed by powerful people in Banaras. He challenges the system that he will take his father’s revenge in front of the world and will walk out ‘not guilty’ from the court, but how?

A BINGE-WORTHY CRIME THRILLER WITH A RETRO FEEL TO IT

STORY: It’s about Akhil Shrivastav (Divyenndu Sharma), a budding writer, who is on a revenge spree after he loses his father under brutal circumstances and the cover-up that infuriates him further.

REVIEW: Set in Banaras, ‘Bicchoo Ka Khel’ revolves around two individuals, Babu (Mukul Chadda) and his son Akhil Shrivastav. In the daytime, the duo works in ‘Chaubey Mishthan Bhandar’ run by Mukesh Chaubey (Rajesh Sharma) while night transforms them into small-time thieves. On a fateful night, Babu goes into a vacant house for burglary and soon enough, he gets arrested for the murder of local goon — Munna Singh (Gautam Babbar). One thing leads to another and Babu is found dead in prison. Akhil believes that his father was framed and murdered so he decided to uncover the truth.

Based on Amit Khan’s novel of the same name, this series kick starts with Akhil shooting noted advocate and social worker, Anil Chaubey (Satyajit Sharma), in front of a live audience during university festival. After killing him, Akhil surrenders to the police and his interrogation scenes give a sneak-peak into the lives of different characters who have cross path with the vengeful man.

From the beginning, director Ashish R Shukla leaves no stone unturned in keeping this crime thriller engrossing. There is a total of 9 episodes with a duration of 20 – 23mins each and all are stacked with ample twists and turns. Sunil Pillai’s cinematography is commendable and the screenplay by Ghalib Asad Bhopali and Gibran Noorani is fast-paced. It’s engaging to the level that whenever you feel you are closer to the truth; it takes a new turn and tells you there’s much more waiting ahead. However, now and again, the pace at which the narrative is headed makes it difficult for the viewers to connect the dots. Another setback for ‘Bicchoo Ka Khel’ is its climax —may come off as disappointing to many. The initial build-up is extremely effective and keeps you glued, but the big reveal in itself isn’t all that explosive.

Fans of Divyenndu Sharma aka Munna Bhaiya from Mirzapur will not be disheartened with his act as Akhil Shrivastav. He is back with a bang – mouthing dialogues laden with cuss words, his expressions and comic timing is just brilliant. Anshul Chauhan as his girlfriend Rashmi Chaubey has nailed it. Her chemistry with Divyenndu is endearing and turns out to be one of the highlights of the show. Rajesh Sharma with his on-screen wife Protima (played by Trishna Mukherjee) also add to the crime-thriller with their measured, dependable acts.

Keeping up with the vibe of the 80’s golden era of Indian cinema, ‘Bicchoo Ka Khel’ has everything—from hero-heroine ka pyaar and gundas to dhamakedar actions and elaborate songs. With all the components intact, this revenge saga starts on a promising note but turns out to be an average watch later.