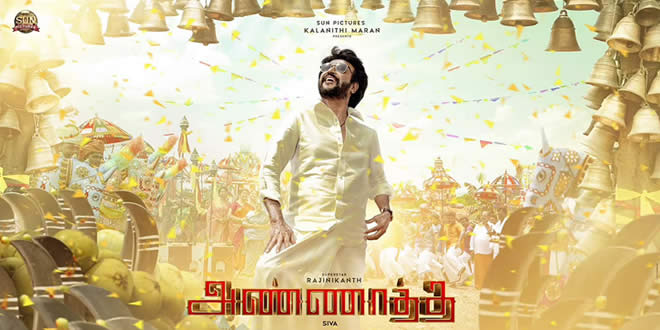 It is based on the relationship shared between a brother and his sisters.

Annaatthe is an upcoming Indian Tamil-language action drama film written and directed by Siva and produced by Kalanithi Maran under the banner of Sun Pictures. The film stars Rajinikanth, Meena, Khushbu, Nayanthara and Keerthy Suresh. While Jagapathi Babu, Prakash Raj, Vela Ramamoorthy, and Soori in prominent roles. The music for the film will be composed by D. Imman while cinematography and editing are performed by Vetri and Ruben respectively. The film is scheduled to release on the occasion of Diwali, 4 November 2021.

Initially Annaatthe was scheduled to release coinciding with the eve of Dusshera festival. Later, in May 2020, Sun Pictures announced that the movie will be scheduled to release during the occasion of Pongal. But the movie was postponed further citing the delay in filming due to the COVID-19 pandemic. In January 2021, Sun Pictures announced that the film will be released on 4 November 2021, coinciding with Diwali festival.

The music for the film will be composed by D. Imman, collaborating with actor Rajinikanth for the first time, and featured lyrics written by Thamarai, Viveka, Yugabharathi, Arun Bharathi, Mani Amuthavan and Arivu. Veteran singer S. P. Balasubrahmanyam, had recorded an introduction song for Rajinikanth in the film, which marks his last song before his death on 25 September 2020. In an interview with Sudhir Srinivasan of The New Indian Express, Imman said that “Fans expect certain factors from Rajinikanth’s songs. On the other hand, I want the album to carry my identity as well. I have to cater to both. In addition to that, Rajini sir is acting in a full-fledged rural entertainer after a while. So, the Annatthe album should justify all these aspects.” He said that the opening track, sung by SPB was considered to be the “best-ever opening song” for Rajinikanth.

Apart from SPB, other singers who crooned the songs from the music album were Sid Sriram, Shreya Ghoshal, Anirudh Ravichander, Diwakar and the composer Imman himself. The soundtrack was reported to feature about five songs and a theme music; totally six tracks in the soundtrack album, and has varied genres — opening song, melody, dance and festive numbers. Sun Pictures had planned to withhold the audio rights, along with the satellite and digital rights of the film and had planned to release the entire soundtrack through the company’s music label Sun Audio.

Rajinikanth’s film is a colossal mess, weakest in Siva’s filmography

Director Siva, who has joined hands with actor Rajinikanth for the first time in Annaatthe, is nine films old and enjoys a very high success rate. Siva is one of the safest filmmakers in Tamil cinema and is content making films by taking the tried-and-tested route. The only time he tried to make something out of his comfort zone was when he made Vivegam with Ajith, and it didn’t work at the box office. He followed it up with a highly predictable rural entertainer, Viswasam, and it ended up as one of the biggest hits of the Tamil film industry.

Siva’s latest release Annaatthe feels like it has been made by taking a leaf out of the success of Viswasam, but unfortunately, the formula doesn’t work in the film’s favour. Despite all the hype and Rajinikanth’s on-screen charisma, Annaatthe ends up as a colossal mess, and that’s putting it mildly.

Rajinikanth plays Kaaliyan, a village president who only bows to goodness and moral fairness, in Annaatthe. His world revolves around his sister Thanga Meenakshi, played by Keerthy Suresh. When she returns home after completing her education, Kaaliyan turns her arrival into a grand celebration. During the festivities, some members of the family feel that it’s time to get Meenakshi married, and they convey the same to Kaaliyan.

Unsure of the suggestion, Kaaliyan consults with his sister about the idea, and she tells him that it’s his decision that matters the most to her. Meenakshi gets married and shifts to Kolkata where she faces some unknown threats. Just when she feels things are going out of her hand, her brother comes to her aid.

If Siva’s last film was about a father-daughter relationship, it’s the brother-sister relationship that he explores in Annaatthe. While things worked in Viswasam, even though the film was high on melodrama, the same can’t be said about Annaatthe because not a single scene stands out. The film is bogged down by the highly melodramatic scenes between Rajinikanth and Keerthy Suresh which usually end in either of the characters crying. In scenes where they aren’t shedding tears, it’s the audiences who are left to suffer. Some amount of realism in the key scenes between these characters would have helped the film stay more engaging.

It’s alright to make an out-and-out, logicless commercial film with Rajinikanth but Annaatthe is just the kind of film you should stop making. Also, Siva’s obsession with filling the film with so many characters just doesn’t make sense when you forget most of them when you walk out. It was disappointing to see actors like Khushbu and Meena being wasted in silly roles that absolutely have no purpose.

Rajinikanth is earnest as always but there’s not much that he could do to salvage the film. When the story shifts to Kolkata after a dreadful first half that’s mostly filled with scenes between Rajinikanth and Keerthy, the film gets even more painful to sit through, courtesy of the roles played by Jagapathi Babu and Abhimanyu Singh, who play the antagonists.

Annaatthe is unarguably the weakest film in Siva’s filmography. For all those who complained Darbar was Rajinikanth’s lamest film in recent years, they’ll change their opinion as they step out of Annaatthe.