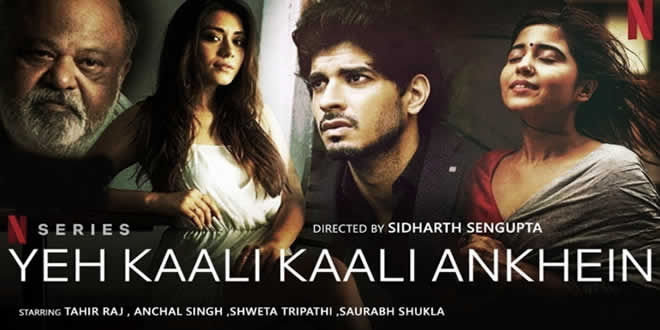 Aggressively pursued by a politician’s daughter who will do anything to marry him, a small-town man takes drastic measures to reclaim his life.

A chase between love and desire

The trailer of ‘Yeh Kaali Kaali Ankhein’, which was released recently, promises a tale of love, desire, crime and the chase between powerful political forces and a couple in love.

The series revolves around the life of a small-town simpleton named Vikrant played by Tahir, who gets pursued by Purva, the obsessive daughter of a local politician as Vikrant becomes her object of desire.

Talking about the series, producer-director-showrunner Sidharth Sengupta says, “The idea of ‘Yeh Kaali Kaali Ankhein’ was brewing for almost 20 years. Since television is conservative in India, both Anahata (the writer) and I had kept this story close to us, waiting for the opportune moment to tell it and then Netflix happened. It took a few drafts to get the best script possible and breathe life into it.”

Revealing his inspiration for the story, he adds, “My inspiration for the series comes from the pulpy thrillers in classic Indian cinema spotlighting Vijay Anand and Salim-Javed, whom I grew up admiring. I have always been a fan of their work and ‘Yeh Kaali Kaali Ankhein’, the title inspired by the iconic ’90s hit song from a film of the same genre, is an ode to all the pulpy thrillers of those times. The world of ‘Yeh Kaali Kaali Ankhein’ showcases real characters, an interesting dialect, locations, cultural nuances and the overall visual treatment of the series.”

Commenting on his experience of working with the actors in the series, the director shares, “It’s been an absolute privilege to work with such amazing talent who have brought these layered characters to life; whether it’s the engaging story by Anahata Menon, the sharp and witty dialogue by Varun Badola, or the high-octane performances from Tahir Bhasin, Shweta Tripathi, Anchal Singh, Saurabh Shukhla, Brijendra Kala, Surya Sharma, Anant Joshi and the others.” He continues, “All the characters have shades of gray, a reflection of real life, and the actors have done a brilliant job bringing them to life. A special mention to the music by Shivam Sengupta and Anuj Danait, which brings in the desired flavor and soul to the series.”

The series produced by Edgestorm Ventures Pvt Ltd and directed by Sidharth Sengupta, will be available to stream on Netflix from January 14.