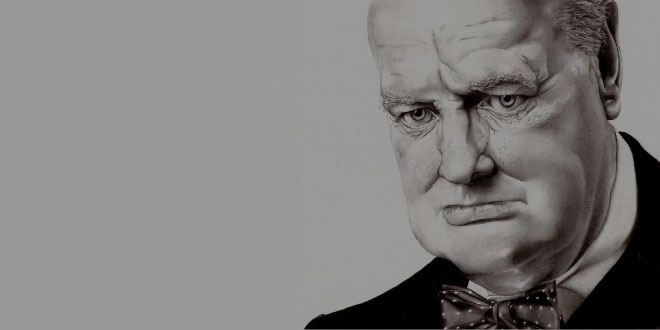 In the “Iron Curtain speech” Winston Churchill drew attention to the fundamental split in Europe between the Eastern Bloc and the West, though at that stage (March 1946) there were no formal alliances. He had a fear of another world war that involves fighting against the communist regime and that the so called iron curtain is blocking some of the countries connection to the western countries because of the communist terror.

In one of the most famous orations of the Cold War period, former British Prime Minister Winston Churchill condemns the Soviet Union’s policies in Europe and declares, “From Stettin in the Baltic to Trieste in the Adriatic, an iron curtain has descended across the continent.” Churchill’s speech is considered one of the opening volleys announcing the beginning of the Cold War.

Churchill, who had been defeated for re-election as prime minister in 1945, was invited to Westminster College in Fulton, Missouri where he gave this speech. President Harry S. Truman joined Churchill on the platform and listened intently to his speech. Churchill began by praising the United States, which he declared stood “at the pinnacle of world power.” It soon became clear that a primary purpose of his talk was to argue for an even closer “special relationship” between the United States and Great Britain—the great powers of the “English-speaking world” — in organizing and policing the postwar world. In particular, he warned against the expansionistic policies of the Soviet Union. In addition to the “iron curtain” that had descended across Eastern Europe, Churchill spoke of “communist fifth columns” that were operating throughout western and southern Europe. Drawing parallels with the disastrous appeasement of Hitler prior to World War II, Churchill advised that in dealing with the Soviets there was “nothing which they admire so much as strength, and there is nothing for which they have less respect than for military weakness.”

Truman and many other U.S. officials warmly received the speech. Already they had decided that the Soviet Union was bent on expansion and only a tough stance would deter the Russians. Churchill’s “iron curtain” phrase immediately entered the official vocabulary of the Cold War. U.S. officials were less enthusiastic about Churchill’s call for a “special relationship” between the United States and Great Britain. While they viewed the English as valuable allies in the Cold War, they were also well aware that Britain’s power was on the wane and had no intention of being used as pawns to help support the crumbling British empire. In the Soviet Union, Russian leader Joseph Stalin denounced the speech as “war mongering,” and referred to Churchill’s comments about the “English-speaking world” as imperialist “racism.” The British, Americans, and Russians-allies against Hitler less than a year before the speech – were drawing the battle lines of the Cold War.