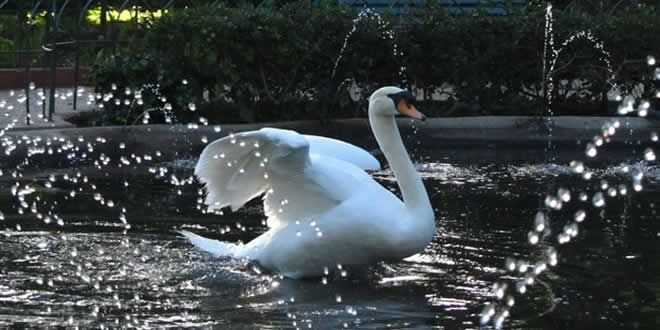 Swan — Swans, genus Cygnus, are birds of the family Anatidae, which also includes geese and ducks. Swans are grouped with the closely related geese in the subfamily Anserinae where they form the tribe Cygnini. Sometimes, they are considered a distinct subfamily, Cygninae. There are six to seven species of swan in the genus Cygnus; in addition there is another species known as the Coscoroba Swan, although this species is no longer considered related to the true swans. Swans usually mate for life, though ’divorce’ does sometimes occur, particularly following nesting failure. The number of eggs in each clutch ranges from three to eight.

Swan: Birds of the family Anatidae

The swans are the largest members of the duck family Anatidae, and are among the largest flying birds. The largest species, including the mute swan, trumpeter swan, and whooper swan, can reach length of over 1.5 m (60 inches) and weigh over 15 kg (33 pounds). Their wingspans can be almost 3 m (10 ft). Compared to the closely related geese they are much larger in size and have proportionally larger feet and necks. They also have a patch of unfeathered skin between the eyes and bill in adults. The sexes are alike in plumage, but males are generally bigger and heavier than females.

The Northern Hemisphere species of swan have pure white plumage but the Southern Hemisphere species are mixed black and white. The Australian Black Swan (Cygnus atratus) is completely black except for the white flight feathers on its wings; the chicks of black swans are light grey in colour, and the South American Black-necked Swan has a black neck.

The legs of swans are normally a dark blackish grey colour, except for the two South American species, which have pink legs. Bill colour varies: the four subarctic species have black bills with varying amounts of yellow, and all the others are patterned red and black. Although most birds generally do not have teeth, swans are known to be an exception to this, having small jagged ’teeth’ as part of their beaks used for catching and eating fish. The Mute Swan and Black-necked Swan have a lump at the base of the bill on the upper mandible.

The swans are generally found in temperate environments, rarely occurring in the tropics. A group of swans is called a bevy or a wedge in flight. Four (or five) species occur in the Northern Hemisphere, one species is found in Australia and New Zealand and one species is distributed in southern South America. They are absent from tropical Asia, Central America, northern South America and the entirety of Africa. One species, the Mute Swan, has been introduced to North America, Australia and New Zealand.

Several species are migratory, either wholly or partly so. The Mute Swan is a partial migrant, being resident over areas of Western Europe but wholly migratory in Eastern Europe and Asia. The Whooper Swan and Tundra Swan are wholly migratory, and the Trumpeter Swans are almost entirely migratory. There is some evidence that the Black-necked Swan is migratory over part of its range, but detailed studies have not established whether these movements are long or short range migration.

Swans feed in the water and on land. They are almost entirely herbivorous, although small numbers of aquatic animals may be eaten. In the water food is obtained by up-ending or dabbling, and their diet is composed of the roots, tubers, stems and leaves of aquatic and submerged plants.

Swans form socially monogamous pair bonds that last for many years, and in some cases these can last for life. Modern genetic techniques are starting to reveal that ’divorces’ are more common than previously thought, as is mating with other swans outside of the social pairing, without breaking the social pair bond. These bonds are maintained year round, even in gregarious and migratory species like the Tundra Swan, which congregate in large flocks in the wintering grounds. The nest is on the ground near water and about a metre across. Unlike many other ducks and geese the male helps with the nest construction. Average egg size (for the mute swan) is 113×74 mm, weighing 340 g, in a clutch size of 4 to 7, and an incubation period of 34-45 days. With the exception of the whistling ducks they are the only anatids where the males aid in incubating the eggs.