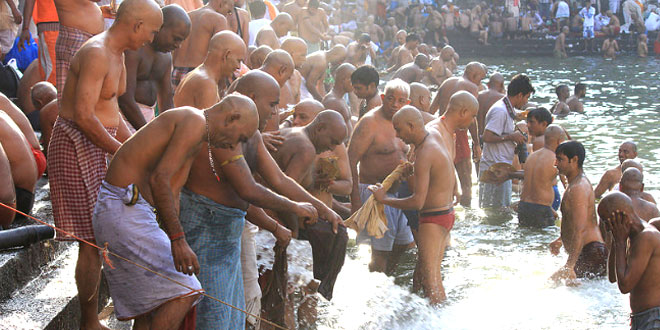 The Sarva Pitru Amavasya also known as the Mahalaya Amavasya (Maha means large and laya means destruction) is performed during the Lunar Period that occurs somewhere between the months of September and October as per the Gregorian calendar. According to the Amavasyant calendars Sarva Pitru Amavasya is performed on the new moon day in the month of Bhadrapada. It falls in the month of Ashwin in Purnimant calendars. It is observed by Hindus irrespective of which community they belong to.

Sarva Pitru Amavasya or All fathers’ New Moon Day is intended for all departed souls in general irrespective of the lunar day they died. It is the most important day of Pitru Paksha. Pitru Paksha is a Sanskrit word that literally stands for ‘fortnight of the ancestors.’ Pitru means ancestors and Paksha means fortnight. Therefore, Pitru Paksha is a 15 lunar day period during which the Hindus pay homage to their ancestors mainly by way of food offerings. The period commences with the full moon day or Purnima that takes place immediately after Ganesh Chaturthi and ends with the new moon day or Amavasya known as Sarva Pitru Amavasya or Mahalaya Amavasya. This last day is the most important and highly sacred day.

On this day, Shraddh and Tarpanam rituals are performed for the deceased members of the household who died on the tithis of Chaturdashi, Purnima or Amavasya. The performance of Sarva Pitru Amavasya rites can also compensate for any Shraddh ceremony apart from those following the tithis which may have been skipped during the year.

A shraddh ritual performed on this day is considered as fruitful and sacred as the one conducted in the holy city of Gaya, which is regarded as a special place to perform such rites.

Generally, a Shraddh is performed by the eldest son or any male relative of the paternal branch of the family limiting to the three preceding generations. However, on Sarva Putra Amavasya or Matamaha, the daughter’s son can also offer Sharaddh for the maternal side of the family if there is no male heir in the mother’s family. Some castes perform the Shraddh for only one generation. However, before performing the ritual, it is mandatory that the male child should have undergone a thread ceremony.

According to the Hindu religion, it is widely believed that a person should repay three types of Rinas or debts to attain life without any agonies. The three Rinas are Deva Rina, Rishi Rina and Pithru Rina which is debt to God, guru and ancestors.

It is regarded as the responsibility of the son to serve the parents when they are living as well as after their demise by performing the Shraddh to relieve the departed souls. The importance of these rites and rituals are mentioned in the Puranas namely, the Garuda Purana, Vayu Purana, Agni Purana, Matsya Purana and Markandeya Purana.

The benefits of the Amavasya Pitru Tharpan are as follows:

In case a person is too desolate to donate the offerings and perform the rituals, he can ask for forgiveness and promise to make the same once he is in a better position to offer.

People even pray to the forefathers for cures of hereditary ailments which may be resulting in the sickness and/or death in the family. Family feuds related to ancestral property are tried to be dealt with in an amicable manner. Forgiveness is sought and an attempt is made to be more generous and selfless in one’s relationships.

It is believed that the souls of the departed loved ones wander aimlessly on earth and are sometimes pained by the activities they believe can affect their lineage. Thus, it is important to appease these souls as their anger and curse could result in great destruction of the family. On the last day, boys of young age in the family are also expected to learn and perform the rituals as they are believed to be the ones to look after the past and the future of the family.

It is believed that people who wish to express their gratitude to their lineage for having been born into this world will perform the Sarva Pitru Amavasya ritual. From an astrological point of view, those who have pitrudosha or putradosha in their horoscopes must perform these rituals to reduce or get rid of the dosha. People who have back to back problems in life especially to do with debt, disease and ailments are expected to perform these rituals on Sarva Pitru Amavasya.

Shraddha involves oblations to three preceding generations as well as to the mythical lineage ancestor (gotra).The names of the ancestral members are recited. A person thus gets to know the names of six generations (three preceding generation, his own and two succeeding generations – his sons and grandsons) in his life, reaffirming lineage ties. The concept of lineage by blood is paramount and central of the idea of the occasion. The current generation repays their debt to the ancestors till the last day. This debt is considered of utmost importance along with a person’s debt to his gurus and his parents.

The Mahalaya in Bengal

In Bengal, Mahalaya marks the beginning of the Durga Puja festivities. It is believed that on the day of Mahalaya, the goddess Durga descended to Earth. Traditionally, the Bengali people wake up early in the morning on this day to recite shlokas from the Devi Mahatmyam or Chandi scriptures. There are offerings made to the ancestors in homes and at puja mandaps. Matamaha or Mother’s father or Dauhitra or Daughter’s son also marks the first day of the month of Ashwin and the start of a luminous fortnight ahead.

Legend has it that there was an occasion in Hindu mythology that a fierce battle took place between the Devtas (Gods) and Rakshasas (Demons) in which a large number of people from both the sides were killed. This war took place from Bhadrapada Bahula Paadayami to Amavasya. This period is also known as Sasthrahatha Mahalaya and the Gods and Demons who perished during the war are paid homage to.

Another ancient story relates to the Mahabharata hero, Karna. During his lifetime, the generous Karna donates all kinds of gold and silver but not food. Thus, after his death, when he went to the higher regions, he received a lot of riches in the form of gold and silver but no food. The distressed Karna prayed to Lord Yama, the God of death and with his grace returned to the earth during this Paksha or fortnight. He donated plenty of food to the needy on all fifteen days. On the last day, he went back to the Pitru Lok with a lot of satisfaction and fulfillment. For this reason, Annadaana or food donation is regarded as most auspicious on these days. It has become a popular practice that those who cannot afford to donate food on all days usually do so on the last day, that is, on Sarva Pitru Amavasya. Yama also ordained that all offerings made during this period will benefit not only the ancestors that were related to the donor but also the ones not related.