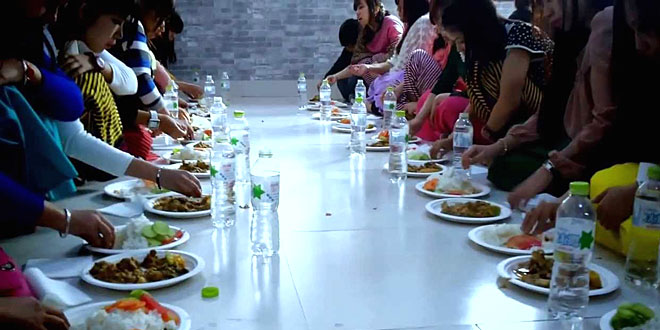 Ningol Chakkouba a popular festival of the state of Manipur; for the Meitei community, it is certainly one of the premier festivals. It is celebrated on the second day of the lunar month of Hiyanggei (which falls in October-November of the Georgian calendar), and is comparable to Bhagini Hasta Bhojanam of South India. “Ningol” means the daughter of a family, whether married or unmarried in Meiteilol (i.e. in Manipuri language). “Chakkouba” stands for feast. On this day, the married women of Manipur go to their paternal homes for a feast, and receive gifts from their parents and brothers. In short, this festival honors the love between the siblings of a household.

The origin and exact date of this festival is not known. However according to legends the festival is said to be started in around fourth century. Queen Laisana started a trend to invite brother to sister’s home for feast. Initially the festival was called Piba Chakouba, Piba means son. Maharaj Chandrakriti, who ruled during the nineteenth century, found the task of visiting each of his sisters separately troublesome. As an alternative, he invited all of them to his palace instead, and thus Piba Chakkouba became Ningol Chakkouba.

Invitations are sent to the Ningols before the 2nd day of Hiyanggei; this invitation is not a plain old card, but a betel leaf folded over betel nuts. When the auspicious day finally arrives, the Ningols of the Meitei community dress themselves in their finest clothes and visit their family, taking sweets, fruits, and other delicacies. Then, they enjoy a grand feast at their former homes. The feast usually consists of a meat item (generally fish), and other traditional items, such as iromba, champhut and kanghou. Later in the afternoon, gifts are presented to the ningols and their children, and in return, they give blessings to their parents and brothers.

These days, Ningol Chakkouba shopping has grown so big that one can expect the market areas to suffer traffic jams in the days leading up to it. Fish fairs are held in the preceding day and Tambola games locally popular as ‘Housie’ is organized in many parts of the localities, giving away handsome prizes for the winners. Functions dedicated to the women of Manipur are held, and special screenings of popular movies are shown at theaters.

Ningol Chakkouba pays tribute to the bond between siblings and strengthens it. It is an occasion for a family get together. It is celebrated elsewhere in India, with brothers inviting their sisters and cousins for a feast. The ningols need not be married to enjoy a feast thrown by the brothers. Manipur Baptist Convention (MBC), along with Tangkhul Church Charitable Trust, Delhi, also organises the festival for their tribal sisters who have married into Meitei families. Thus, it is an overall symbol of familial love.