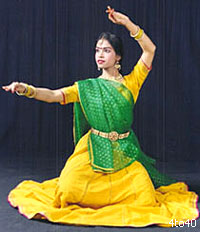 Lucknow Festival — This festival is celebrated between 25th November and 5th December in Lucknow, the capital city of U.P. It captures the undying elegance and splendours of ancient city Awadh, now known as Lucknow. This festival celebrates Lucknow’s living culture, which provides an insight into the old, cultured, atmosphere of the city. Colourful processions, traditional dramas, Kathak dances in the style of the famous Lucknow Gharana, Sarangi and sitar recitals along with ghazals, qawalis and thumri create a festive atmosphere. Exciting events like ekka races, kite flying, cock fighting and other traditional village games recreate an atmosphere of bygone Nawabi days. There is a display of crafts and one can have a taste of the famous Nawabi cuisine.

The annual Lucknow Festival showcasing Avadhi culture, tradition and cuisine started in Lucknow on the bank of River Gomti on November 25.

The 15-day festival, organised jointly by UP Tourism and Lucknow District Administration, will, this time, also have stalls by the craftsmen of other states presenting a composite culture of the entire country.

Besides providing a platform for the local talents, the festival will also have programmes by well-known personalities including Shovana Narayan, the Vadali brothers, Shubha Mudgal, Hansraj Hans, Pandit Jasraj, Hema Sardesai and Sapna Awasthi.

The Lucknow Festival, held in the months of November-December every year, captures the undying elegance and splendour of Awadh, now Lucknow. A brilliant showcase of the arts, crafts, and above all the exotic cuisine of this land, the festival is a once-in-a-lifetime experience.

During the festival, the city of Lucknow is abuzz with excitement and activity. Colourful processions, traditional dramas, Kathak dances in the style of the famous Lucknow gharana, sarangi and sitar recitals along with ghazal, qawali and thumri sessions create a festive atmosphere. Exciting events such as ekka races, kite flying, cock fighting and other traditional village games recreate an atmosphere of Awadh’s nawabi days.

And to top it all, one can taste the traditional delicacies of Lakhnawi cuisine, ranging from mouth-watering vegetarian cuisine to the lip-smacking non-vegetarian spread for which Lucknow is famous.