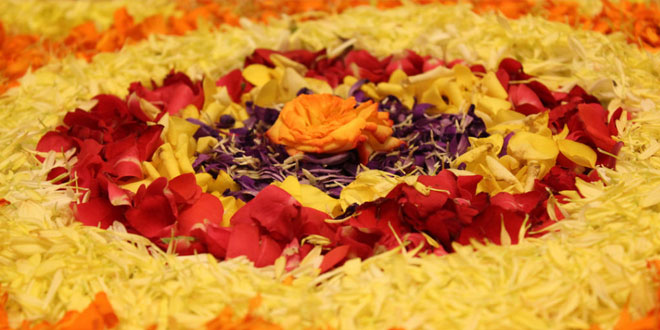 Onam Rituals: The harvest festival of Kerala – Onam – is celebrated with zeal and great fanfare by Malayalees all over the state, India and abroad. It is an enthralling carnival during the festive season, when people indulge themselves in merrymaking by playing a number of games, shopping, feasting, dances and taking part in the community events wherein cultural programs are organized.

Since it is a harvest festival, a number of rituals are followed by people, especially the farmers. The customs of Onam may vary from region to region, because people in the southern state of Kerala are known for the performance of rituals that are native to their place. Go through the following lines to get some interesting information on the rituals of Onam festival.

On the ninth day of Onam, tenants of the family, dependents and hangers-on present the fruits of their labor, such as vegetables and coconut oil, to ‘Karanavar’, (the eldest member of the family) in a ritual called ‘Onakazhcha’. In return, they are treated with a sumptuous feast on the main day of Onam. It is also customary for the village artisans to present the Karanavar of each Nair Tarawad, a specimen of his handiwork in return of the presents of cloth or rice.

Maveli Puja is one of the prominent rituals of Onam. Specific to the Malabar (northern) part of Kerala, people residing there perform the Maveli Puja on the Uthradam (ninth day) and Thiruvonam (tenth day) of Onam. In order to perform the puja, three small sized figurines, made of red sand are erected, at the verandah of households. The puja is performed early in the morning as well as in the dusk, by the prominent man (generally the bread-winner) of the home. The three red sands are regarded as king Mahabali.

Thripunitura Athachamayam is a grand procession held at Thripunithura, in Ernakulam district of Kerala. The custom is followed since ages. The grand procession marks the beginning of Onam celebrations in Kerala. According to the historical records, this was the royal tradition followed at the time, when Maharajas of erstwhile Kochi State traveled to Thripunithura Fort, accompanied by their entire entourage. Today, even in the absence of the King, the custom retains is legacy and charm. Caparisoned elephants are the highlight of the procession.

Onathallu is a mock fight performed to mark the advent of the festive season of Onam. Also referred to as Kayyankali, Onathallu is a very old ritual that is followed in many regions of Kerala. In the barehanded fight, the combatants are clad in mundu (dhoti) or plain white cotton cloth that is worn high, like tight shorts. The men are accessorized with a sort of bandage around their legs, which protects them from injury. Apart from being a ritual, Onathallu is an interesting game that is performed by the male members of the family, during Onam.