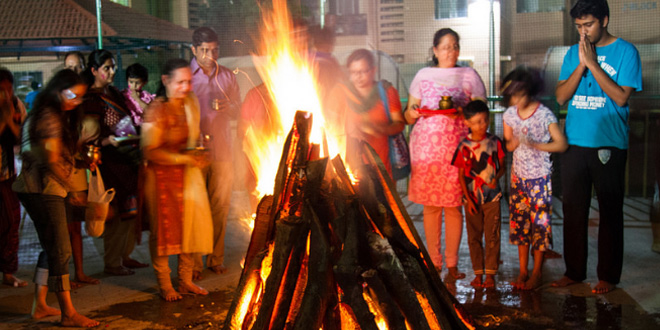 Holi Pooja takes place a day before the Holi Festival. This day is called as ‘Holika Dahan‘. There is no special pooja performed on the Holi day. This day is only meant for celebrations and play of colors. Holika Dahan is the major ritual performed at the time of Holi which is also considered an important Holi Puja. People light bonfires on the eve of Holi festival to celebrate the victory of ‘good’ over ‘bad’ which is called Holika Dahan.

Holika Dahan preparations begin almost 40 days before the festival. People start gathering woods on the important crossroads of the city. Holi Pooja or Holika takes place on an auspicious time in the evening a day before the Holi festival. Given below are the steps and rituals for the Holi Pooja:

Holi Pooja is performed in a different manner in some communities. Marwari women offer Holi puja in the afternoon and evening i.e. before setting fire to ‘Holika’. It is called ‘Thandi Holi’. The whole puja process is considered very auspicious for the married women. It ensures well-being and healthy life of their husband.

Previous Legend of Holi: Holika and Prahlad
Next Holi in Maharashtra: Shimga or Rangpanchami