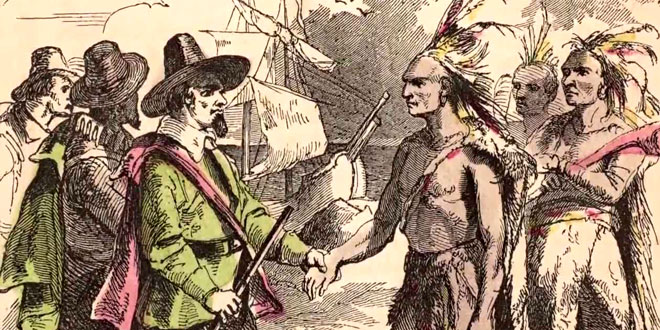 The origin of modern Thanksgiving holiday can be traced to the celebrations at the Plymouth plantations in 1621, where a harvest feast was organized by the settlers, after a successful crop season. This iconic event is generally referred to as ‘First Thanksgiving’. The celebrations were held after a much-needed rain that revived the crop of corn and other fruits. Massasoit, the chief of the Native Indians or Wampanoag’s, and his family were invited for the celebration (perhaps as a political maneuver, to participate in the feast), who brought all his extended family that constituted of ninety guests and stayed for three days.

The first documented Thanksgiving celebrations in the Plymouth colony were held in 1623. A true Thanksgiving was not held till 1623, when the Plymouth settlers switched over to privatized farming from communal farming, which started giving a decent harvest. Gradually, other states of US joined the observance of Thanksgiving Day. Abraham Lincoln, for the first time, appointed the last Thursday in November as National Thanksgiving Day, perhaps to commemorate the anchoring of the Mayflower at Cape Cod on November 21, 1621. President Franklin D. Roosevelt later changed the date of Thanksgiving to the fourth Thursday of November, in 1939.

History Of Thanksgiving In Canada

Martin Forbisher, an explorer, was trying to find a northern passage to the Atlantic Ocean. After he safely returned from his perilous search, successfully avoiding the fate of some other unfortunate explorers, he held a formal ceremony in the present province of Newfoundland and Labrador. This ceremony was held in 1578, for giving Thanks to the Almighty, for surviving through a long journey. The feast celebrations are known as one of the first Thanksgiving celebrations in North America. However, celebrating a good harvest and giving thanks for a successful crop season had been a longstanding custom all through the north of America. Canada‘s First Nations and Native Americans used to organize harvest festivals and throw grand feasts from long before.