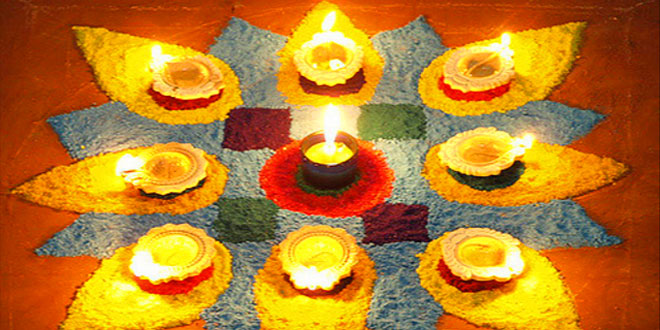 Diwali Rangoli: Rangoli is the art of drawing images and figures on the floor, at the doorstep of one’s home. With the beautiful combination of colors, rangoli makes a magnificent piece of art. It has been a tradition in culturally rich India, to draw rangoli on festivals and other auspicious occasions, as it is considered a holy ritual. It makes a part of Diwali celebrations too. The main purpose of making rangoli at the doorstep, on Diwali, is to welcome Goddess Lakshmi, the Goddess of Wealth.

The art of rangoli is known by different names in different regions of the country. In Maharashtra, it is called ‘rangoli’, while it is known as ‘kolam’ in South India and ‘alpana’ in Bengal. While most of the Rangoli designs are made with the use of dry colors, the patterns can also be done by using the paste of rice grains, turmeric paste, vermilion powder or chalk. So, this Diwali, use the rangoli decoration ideas given below and bring a sense of completion in the joyous celebration of the festival.

There are myriad ways to add to the overall appeal of rangoli. The designs of rangoli are created by a combination of different colors. It could be decorated either by colored powders or by colored pastes such as painting colors. You can enhance the beauty of your rangoli pattern by adding some decorative pieces to it, such as the lighted diyas, colorful flower petals and leaves, colored rice grains, colorful pulses, and colored sand. You may place a diya at the center of the rangoli.

Originated from Maharashtra, the art of rangoli is popular all over the country and therefore, different designs of rangoli have come into existence. The rangoli designs for Diwali have been passed on from one generation to the other, some of them being as old as hundred years. Although the designs vary largely, in different regions of India, the basic approach of the people is common – to please Goddess Lakshmi, so that she enters the home and brings in health, wealth and prosperity. Generally, the rangoli designs are geometrical shapes, proportioned in a balanced way. Geometrical figures such as circles, triangles, squares, ovals and rectangles dominate. Apart from geometrical figures, images of flowers, their petals, trees and creepers are also drawn.

The common rangoli themes are the holy symbols like mangal kalash, leaves of Ashoka tree, Om, Swastik symbol, a lighted Deepak, Shree, lotus and other flowers, creepers, trees, rising sun, moon, stars, chakra, fish, birds, elephants, dancing figures, trident, human figures and geometrical figures such as circles, semi-circles, curves, triangles, squares, ovals and rectangles. The footsteps of Goddess Lakshmi entering into the home are designed at the main entrance of the home or near the place of worship, which indicates the entrance of prosperity in the home.