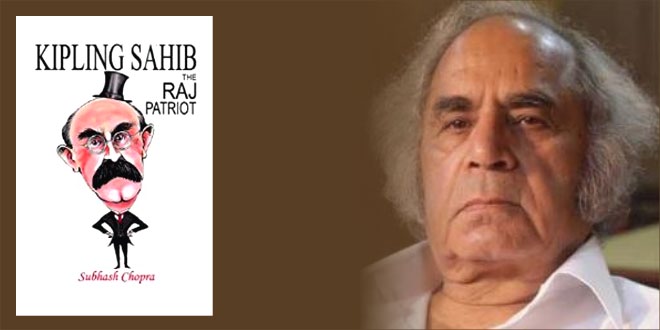 This is an autopsy of Joseph Rudyard Kipling, known to Indians in particular for “Kim” and the more lovable “Jungle Book” stories. Indian journalist Subhash Chopra says the Lahore-born English writer’s knowledge of India was half-baked and his love for India has been overstated. “Yet most of his admirers turn a blind eye to his supremacist mindset.”

True, Chopra tell us, there was a non-political, delightful side to Kipling’s creativity. His substantial work as a writer of children’s fiction – Mowgli and other stories – alone would have earned him a place in the annals of literature. He did win a Nobel Prize. But that does not take away the ugly truth that Kipling, whose 150th death anniversary was marked in December 2015, was “an imperialist to the core”, “a teller of supremacist tales and a carrier of the White Man’s Burden”.

Despite the nearly seven years he spent in India, Kipling’s love for and knowledge of the country was debatable. He had no Indian friends and he knew India through servants and courtiers looking for favours from the white man. His mind was closed to anything good in the East. He would distort or bend Indian words, a liberty he would not take with European languages like French.

For him, the “Mahabharata” and “Ramayana” were “an infinity of trivialities” and “ponderous records of nothingness”. He had contempt for the Pathans — and even Buddhism. Yes, there was occasional nostalgia for India, at times a patronizing attitude towards Indians, and a few displays of affection. But that was not the whole reality.

It is not surprising then that after he returned to London in 1889-90, with the British Raj intact, Kipling was the toast of the town, dining with the likes of Cecil Rhodes, Lord Milner and Sir Walter Besant. Literary London was bowled clean. And although some Indians gave Kipling high marks for his writings, George Orwell was clear: “Kipling is a jingo imperialist, he is morally insensitive and aesthetically disgusting.”

This assessment of Kipling may sound harsh to many. However, if you are a student of English literature, this book is for you.