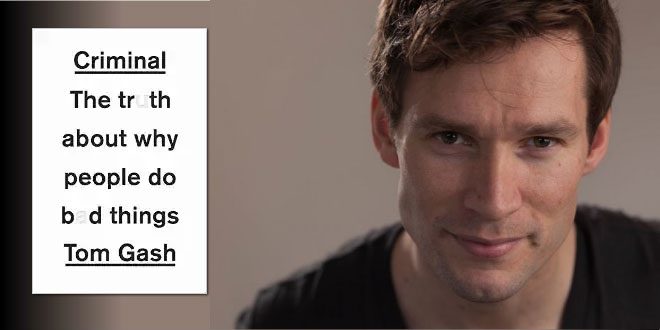 Tom Gash Book Review: Criminal – The Truth About Why People Do Bad Things

‘Crime doesn’t pay’ is something almost everyone is taught around the world, but proves to be less than true (at least in the short run, which is what the great masses of people are concerned with). But is this the only wrong belief about crime and criminals we have, or are our other many long-established perceptions erroneous too?

It may seem hard, in face of the barrage unleashed by mass media about lurid and widespread crime all around us, to believe British expert Tom Gash when he terms ‘myths’ 11 common perceptions including that crime is rising, a life of crime cannot be shrugged off, criminals will stop at nothing, on the omniscient powers of organised crime and many other beliefs we have taken for granted, and governments act on.

Gash, an advisor on crime policy and governance and a Senior Fellow at the Institute for Government, also tells us – and goes on to prove to high certainty – that there are no grounds to show biology determines a criminal disposition, poverty is the main cause of crime, or its rate rises with immigration, or that more police, stricter sentencing, and radical reforms are needed.

He also explains why we must be wary of seductive, but strange-sounding claims of those like Harvard economist Steven Levitt, author (with journalist Stephen Dubner) of the popular “Freakonomics” series.

Gash, whose expertise came from his stint as adviser on ‘home affairs’ in the Prime Minister’s Strategy Unit where he was appointed in 2005 (in the term of Tony Blair), says it was here that he began to realise that “there was a passionate battle of ideas about the nature of crime and its causes, one that shaped many of government’s decisions about how to tackle crime”.

He terms these two opposing theories – the “Heroes and Villains” view, “because of its moral emphasis and central premise that those who commit crime must be confronted by the full force of the justice system to avoid society becoming corrupted”, and the “Victims and Survivors” view, “reflecting the argument that crime is not simply a selfish choice but often one forces by adverse circumstances”. Both obviously can’t be correct, but have been “dominant paradigms” in fiction, documentaries and political debates as well as , turn by turn, influencing policy on crimes and criminals.

Gash, who says his motive in writing this book (his first), was to help “others question their own preconceptions about crime – and through this to improve our collective understanding of human nature and society more generally”, shows the limitations of both as well as how responses to crime are knee-jerk, that may soon lose steam once a new situation arises. (Indians may well remember their reactions after the horrendous Delhi gang-rape in December 2012 – and the aftermath).

The issue is that is the “Politicians’ Syllogism” comes into play: “We must do something; This is something; Therefore, we must do this.”

Gash, as he goes counters myth after myth but in a provocatively effective way by building up on it before seeking to demolish it with convincing evidence from a range of disciplines – as well as the information selectively used or ignored – also explores “big questions of life” such as how far our willingness to break the law may have a biological basis, our assumptions about childhood innocence, and so on.

Despite the differing issues, his main thrust is threefold: crime cannot be understood by recourse to human motivations only, the forces of logic must never be overestimated, and small things matter. The last is quite dramatically demonstrated by the obvious seeming but common sense/innovative responses that brought down a high incidence of motorcycle thefts in Germany, metal thefts, including manhole covers, in Britain, bar-room brawls in Australia and car thefts across the western world in the new millennium.

Though his examples and scope mainly deal with the developed world – mostly Europe and North America, but his views will offer much food for thought elsewhere too, especially India, despite contentions that circumstances here are different. But that again may be a myth for those who are yet to relish his refreshing commonsensical approach to law enforcement.