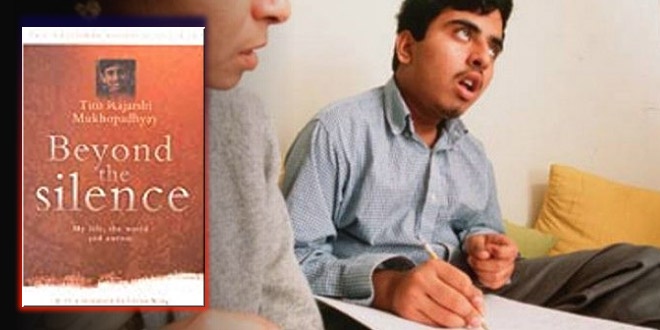 Tito Rajarshi Mukhopadhyay — “Why am I autistic, and you aren’t?” He expresses himself with the help of the alphabet board.
Tito’s world is different from that of other children of his age. He is 11 year old. He is an autistic boy who finds his freedom in words. He is a poet. Tito was declared “Mentally Challenged” when he was three.

He is severely autistic with a profound neurological disability. He does not focus when you talk to him, though he can hear you. He fidgets, flaps his arms and opens his mouth as if gasping for air. But this disability has not stopped him from sharing his life with the fortunate.

Tito has expressed how an autistic child feels in his maiden compilation “Beyond the silence”. This book stores in the day-to-day account of a boy who lives through the frustrating experience of being trapped in an agile mind and caged in an undisciplined body. The book is written in very simple and flowing style. The part one of the book “Voice of Silence” was composed when he was only eight. The book is written in third form (third person) and essays the passionate feeling of a person who has experienced life at its severest.

Tito was evaluated in London at the Center of Social and Communication Disorders. There they found that he had reached the level of a 19-year-old. BBC subsequently made a film on him titled “Tito’s Story”.

In his book, Tito describes how his senses fail to integrate. His sense of hearing is very sharp but he cannot bring himself to see or look at anyone at the same time when he sees, he cannot hear. The result is a fragmented world, received through isolated sense organs.

Tito’s mother Soma 37, a teacher by profession. Soma’s efforts to make Tito learn and disciplining him to behave to gain social acceptance meant disruption of family life. So from her home in Bihar, she tool Tito to Mysore and later to Bangalore, where they now live. She worked with a grim determination and abundant love to make her child understand the world around.

She began to teach Tito with alphabets and number on calendar. She devised ways to get Tito to communicate – pointing to alphabets as he slowly formed sentences. Getting him ‘talk’ by thumping him on the back and expelling air in the form of sound, holding his arm or shoulder so that he felt connected to his body. She taught him writing when he was six. She helped him to overcome his resistance by tying his fingers to the pencil.

She makes Tito run a mile or walk every day, all the while talking to him and explaining things on the way. Soma and Tito together watch Tito’s favorite TV programs. Soma reads to Tito, persuade him to read himself, but Tito likes it more when they read together. This little lad has read classics like Shakespeare, Charles Dickens and Thomas Hardy.

This little writer is eager that his writings should be read. The National autistic Society of UK is willing to sell the rights of the books to Indian publishers. There are two more works that Tito has completed – “The Blue God’s River” “Little Grain of Dust”.

“Tito’s achievements can fuel hopes in the parents of similar children.”