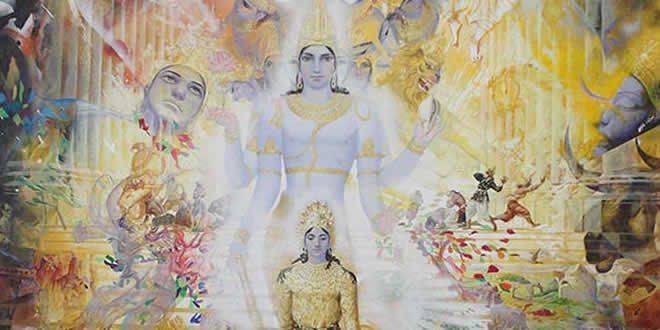 My dear Arjuna, because you are never envious of Me, I shall impart to you this most secret wisdom, knowing which you shall be relieved of the miseries of material existence.

Raja Vidya Guhya Yoga: As a devotee hears more and more about the Supreme Lord, he becomes enlightened. This hearing process is recommended in the Srimad-Bhagavatam: “The messages of the Supreme Personality of Godhead are full of potencies, and these potencies can be realized if topics regarding the Supreme Godhead are discussed amongst devotees. This cannot be achieved by the association of mental speculators or academic scholars, for it is realized knowledge.”

The devotees are constantly engaged in the Supreme Lord’s service. The Lord understands the mentality and sincerity of a particular living entity who is engaged in Krishna consciousness and gives him the intelligence to understand the science of Krishna in the association of the devotees. Discussion of Krishna is very potent, and if a fortunate person has such association and tries to assimilate the knowledge, then he will surely make advancement toward spiritual realization. Lord Krishna, in order to encourage Arjuna to higher and higher elevation in His potent service, describes in this Ninth Chapter matters more confidential than any He has already disclosed.

The very beginning of Bhagavad-gita, the First Chapter, is more or less an introduction to the rest of the book; and in the Second and Third chapters, the spiritual knowledge described is called confidential. Topics discussed in the Seventh and Eighth chapters are specifically related to devotional service, and because they bring enlightenment in Krishna consciousness, they are called more confidential. But the matters which are described in the Ninth Chapter deal with unalloyed, pure devotion. Therefore this is called the most confidential. One who is situated in the most confidential knowledge of Krishna is naturally transcendental; he therefore has no material pangs, although he is in the material world. In the Bhakti-rasamrta-sindhu it is said that although one who has a sincere desire to render loving service to the Supreme Lord is situated in the conditional state of material existence, he is to be considered liberated. Similarly, we shall find in the Bhagavad-gita, Tenth Chapter, that anyone who is engaged in that way is a liberated person.

Now this first verse has specific significance. Knowledge (idam jnanam) refers to pure devotional service, which consists of nine different activities: hearing, chanting, remembering, serving, worshiping, praying, obeying, maintaining friendship and surrendering everything. By the practice of these nine elements of devotional service one is elevated to spiritual consciousness, Krishna consciousness. At the time when one’s heart is cleared of the material contamination, one can understand this science of Krishna. Simply to understand that a living entity is not material is not sufficient. That may be the beginning of spiritual realization but one should recognize the difference between activities of the body and spiritual activities by which one understands that he is not the body.

In the Seventh Chapter we have already discussed the opulent potency of the Supreme Personality of Godhead, His different energies, the inferior and superior natures, and all this material manifestation. Now in Chapters Nine and Ten the glories of the Lord will be delineated.

The Sanskrit word anasuyave in this verse is also very significant. Generally the commentators, even if they are highly scholarly, are all envious of Krishna, the Supreme Personality of Godhead. Even the most erudite scholars write on Bhagavad-gita very inaccurately. Because they are envious of Krishna, their commentaries are useless. The commentaries given by devotees of the Lord are bona fide. No one can explain Bhagavad-gita, or give perfect knowledge of Krishna if he is envious. One who criticizes the character of Krishna without knowing Him is a fool. So such commentaries should be very carefully avoided. For one who understands that Krishna is the Supreme Personality of Godhead, the pure and transcendental Personality, these chapters will be very beneficial.