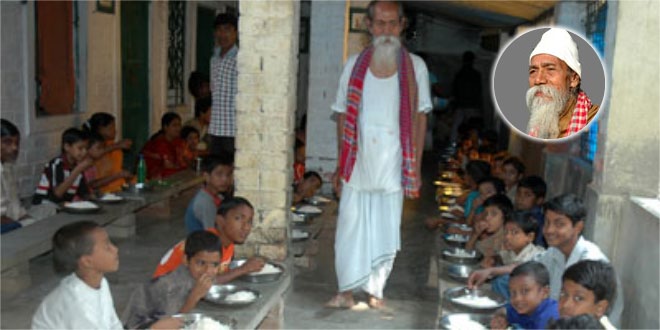 Meet 97-year old freedom fighter Mr. Sudhanshu Biswas, he fought against the British and now he is fighting against poverty.

He fought against the British Army. He has been a part of the famous revolutionary group – Anushilan Samity. He was caught by the British and jailed for several years. The depth of conviction came from his own first-hand experience of being arrested from the examination hall by the British police during his childhood, a memory that has driven him since to help educate the less privileged. Backed by his understanding of the importance and meaning of education.

After independence, enthused by the teachings of Swami Vivekananda – “Service to man is service to God”.

Mr. Biswas founded Sri Ramakrisha Sevashram in a village “Ramkrishnapur” of South 24 Paragans district, 35 kms from Kolkata. No wonder he had chosen this poverty stricken village where there exists neither any temple nor mosque.

He studied Medicine to help the poor.

In the last 40 years, he has set up 18 free schools for the poor children in remote villages in the nearby Sunderban area. Till date, thousands of orphans have stayed and studied in his Ashram.

Owing to urbanization, old people get deserted by their family. He provides shelter to 29 senior citizens from the nearby villages. To top it all, well into his seventies, Mr. Biswas studied general medicine and Homeopathy, observing the irregularities of doctors in villages. He collects medicine samples from physicians and distributes them among the sick.

He says “This life is too short, the vanities of the world are transient, but they alone live who live for others, the rest are more dead than alive.”

He is Healthy and still teaches 10th class mathematics, without the help of calculator. He still carries the bullet marks he received due to his love for his own country.