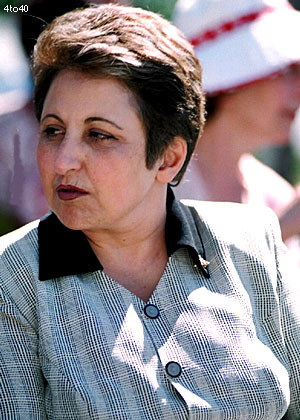 Shirin Ebadi — Awarded the Nobel Peace Prize in 2003 for her advocacy on behalf of Iranian dissidents and others, especially women and children, Shirin Ebadi is a human rights lawyer in Tehran. She is the first Iranian, the first Shia and the first Muslim woman to receive the prize.

In 1975, Ebadi became the first woman to preside over a legislative court. Following the Iranian revolution in 1979, conservative clerics insisted that Islam prohibits women from becoming judges and Ebadi was demoted to a secretarial position at the branch where she had previously presided. She and other female judges protested and were assigned to the slightly higher position of ‘law expert’. She eventually requested early retirement as the situation remained unchanged. As her applications were repeatedly rejected, Ebadi was not able to practice as a lawyer until 1993, while she already had a law office permit. She used this free time to write books and many articles in Iranian periodicals, which made her known widely.

In Iran, officials of the Islamic Republic were either silent or critical of the selection of Ebadi for the Nobel Prize, calling it a political act and were very angry when she did not cover her hair at the Nobel award ceremony. Islamic Republic News Agency reported it in just a few lines and the Iranian state media waited hours to report the Nobel committee’s decision – and then only as the last item on the radio news update. Reformist officials are said to have “generally welcomed the award”, but “come under attack for doing so.” Reformist president Mohammad Khatami did not officially congratulate her and stated that although the scientific Nobels are important, the Peace Prize is “not very important” and was awarded to Ebadi on the basis of “totally political criteria”. Contrary to what certain governments say, human rights are universal. Arbitrary detention, torture and discrimination hurt the human dignity of anybody, whatever his or her country of origin, religion, descent, or any other ground.

If the 21st century wishes to free itself from the cycle of violence, acts of terror and war, and avoid repetition of the experience of the 20th century, there is no other way except by understanding and putting into practice every human right for all mankind, irrespective of race, gender, faith, nationality or social status.