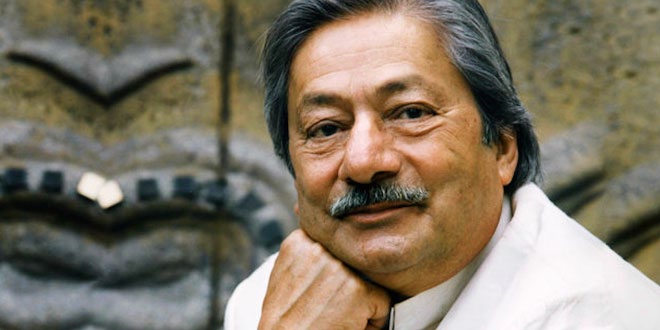 Saeed Jaffrey is one of Britain’s best known and most experienced actors, playing a wide variety of roles in comedy and drama with equal enthusiasm.He went to St. George’s College, Mussoorie and started his career by setting up his theatre company called Unity Theatre, at New Delhi.

His early theatrical work included roles in productions of Tennessee Williams, Christopher Fry, Wilde, and Shakespeare. He did his studies at the Royal Academy of Dramatic Art in London and went to the United States on a Fulbright scholarship, where he took a second post-graduate degree in drama from “The Catholic University of America”.

From these firm foundations Jaffrey set out as the first Indian actor to tour Shakespeare, taking his company across the United States and subsequendy joining the Actor’s Studio in New York, where he played the lead in off-Broadway productions of Lorca’s Blood Wedding, Rashomon, and Twelfth Night. Jaffrey is an accomplished stage actor and has appeared on Broadway and at London’s West End in a diverse range of characterizations.

His work in television has been just as varied. He appeared as Jimmy Sharma in Channel 4’s first “Asian” comedy, Tandoori Nights and as the elegiac Nawab in Granada Television adaptation of The Jewel in the Crown. It was arguably his performance as the smooth Rafiq in the BBC cult-classic Gangsters that brought him to national recognition, even though he had been acting in both theatre and television for several years previously.

In some ways, Jaffrey’s character types have been broadly similar and like Clint Eastwood, he always plays himself playing a character. His impeccable English accent, his dapper style and his catch-phrases-“My dear boy”-are part of his acting persona. His smooth charm is used to good effect whether he plays the archetypal oily, corrupt Asian businessman or the kindly, knowing father figure.

He has also served as the Radio Director(1951-1956) for All India Radio and Director of Publicity and Advertising at Government of India Tourist Office, U.S (1958-1960).

Jaffrey’s career has spanned several decades and is one of a handful of Indian actors who is regularly in employment, be it for radio, television, or the stage.