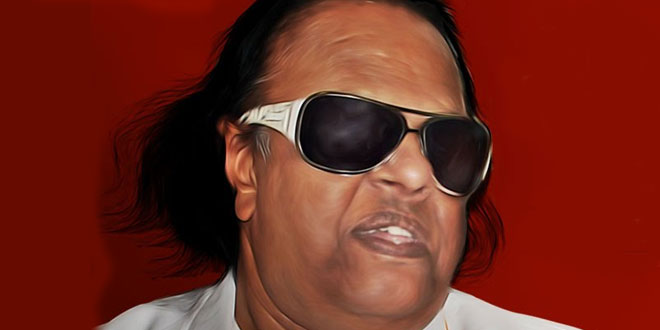 Music maestro Shri Ravindra Jain a multi faceted legend, was born on 28th February, 1944 in Aligarh to father Pt. Indramani Jain Vaidya Shastri and mother Smt. Kiran Devi Jain. Although maestro Ravindra Jain was born with visual impairment – he had inborn natural amazing talent. He was the fourth of the seven siblings. Maestro Ravindra Jain has a caring, highly cultured and literary poetess wife Deevya Jain who is the daughter of Mr. RS Jain and poetess writer Smt Nirmala Jain. He has been blessed with tremendously talented son Ayushmaan Jain.

As a child – maestro Ravindra Jain was always eager to learn new things but because of his visual impairment he could not continue his studies after V standard. But all these constraints didn’t stopped the learning urge in the maestro and he continued his education just by listening to his elder brother. He has now command over multiple languages which include Hindi, English, Sanskrit, Urdu, Bengali, Tamil, Telugu, Malayalam, Arabic, and Punjabi to name a few.

Ravindra Jainji started his professional music career from Kolkata. He recorded his first song for All India radio – where he met renowned producer Shri Radheyshyam Jhunjhunwala. It was this chance meeting which took maestro Ravindra Jain to Mumbai resulting in composing for his first Bollywood movie “Lori” .

This was followed by Maestro Ravindra Jainji’s name getting associated with leading film makers and directors. The first bollywood movie which got released with Ravindra Jain ji’s music and lyrics was “Kaanch aur Heera”. This started the superlative journey of the music maestro with back to back musical hits like “Saudagar, Chor Machaye Shor, Geet Gata Chal, Fakira, Chitchor, Ankhiyon Key Jharokho Se, Nadiya Ke Paar, Ram Tere Ganga Maili, Heena, Vivah to name a few”. Maestro Ravindra Jain continued giving music scores and lyrics for almost 200 movies and in many languages and popular mythological television serials like Ramayan, Jai Shree Krishna, Hanuman Sai Baba and many more, thus influencing music lovers of all generation. His style of music endeavors to bridge many a gap at once, pulling together the mythical, the classical and modern, the folk and the contemporary.

Shri Ravindra Jain’s enormous contribution in the field of music, art and literature – resulting in solidifying multiculturalism and social integration not only in India but across the world. This immense contribution is being acknowledged by the Teerthanker Mahaveer University – who have bestowed maestro Ravindra Jain ji with Doctor of Philosophy degree – by the hands of Honorable former President of India Shree APJ Abdul Kalaam. Four persons have acquired Phd by submitting research on Ravindra Jainji’s life and his work.

He has authored his autobiography titled ‘Sunehre Pal’. Furthermore the maestro shows his genius and versatility by translating “Holy Bhagvat Gita” from Sanskrit to poetic Hindi and “Holy Quran Shareef ” in poetic form from Arabic language to Urdu. He has written, composed and sang many bhajans on Jainism and on Poet Tirthankar Mahavir‘s life. He continues to share his knowledge and expertise by teaching the new talent and guiding research scholars for their PhD work.

Maestro continues his musical journey globally and in India through multiple live shows, spreading the feeling of happiness and brotherhood.

His dream project continues to be his music academy . Through “Ravindra Jain Academy of Music and Fine Arts Charitable Trust”- continues exploring and nurturing the hidden musical talent of the youth.