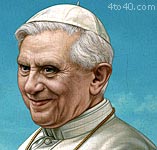 Joseph Alois Ratzinger, Pope Benedict XVI, was born on 16 April, Holy Saturday, 1927 at Marktl am Inn, Diocese of Passau (Germany)and was baptised on the same day. He was the third and youngest child of Joseph Ratzinger, Sr., a police officer, and Maria Ratzinger. His father, belonged to an old family of farmers from Lower Bavaria of modest economic resources. His mother was the daughter of artisans from Rimsting on the shore of Lake Chiem, and before marrying she worked as a cook in a number of hotels. Pope Benedict XVI’s brother, Georg Ratzinger, a priest and former director of the Regensburger Domspatzen choir, is still alive. His sister, Maria Ratzinger, who never married, managed Cardinal Ratzinger’s household until her death in 1991. Their great-uncle was the German politician Georg Ratzinger.

At the age of five, Ratzinger was in a group of children who welcomed the visiting Cardinal Archbishop of Munich with flowers. Struck by the Cardinal’s distinctive garb, he later announced the very same day that he wanted to be a cardinal. Ratzinger attended the elementary school in Aschau am Inn, which was renamed in his honour in 2009. He spent his childhood and adolescence in Traunstein, a small village near the Austrian border, thirty kilometres from Salzburg.

Following his 14th birthday in 1941, Ratzinger was conscripted into the Hitler Youth — as membership was required by law for all 14-year old German boys after December 1939 — but was an unenthusiastic member who refused to attend meetings. In 1943, while still in seminary, he was drafted into the German anti-aircraft corps as Luftwaffenhelfer. Ratzinger was then trained in the German infantry. As the Allied front drew closer to his post in 1945, he deserted back to his family’s home in Traunstein after his unit had ceased to exist, just as American troops established their headquarters in the Ratzinger household. As a German soldier, he was put in a POW camp but was released a few months later at the end of the war in the summer of 1945. He reentered the seminary, along with his brother Georg, in November of that year.

Following repatriation in 1945, the two brothers entered Saint Michael Seminary in Traunstein. From 1946 to 1951 he studied philosophy and theology in the Higher School of Philosophy and Theology of Freising and at the University of Munich. He received his priestly ordination on 29 June 1951 by Cardinal Michael von Faulhaber of Munich. A year later he began teaching at the Higher School of Freising. In 1953 he obtained his doctorate in theology with a thesis entitled “People and House of God in St Augustine’s Doctrine of the Church”. Four years later, under the direction of the renowned professor of fundamental theology Gottlieb Söhngen, he qualified for University teaching with a dissertation on: “The Theology of History in St Bonaventure”. Ratzinger became a professor at the University of Bonn in 1959 and in 1963, he moved to the University of Münster and and at Tübingen from 1966 to 1969. During this last year he held the Chair of dogmatics and history of dogma at the University of Regensburg, where he was also Vice-President of the University. During 1962–65 Ratzinger participated in the Second Vatican Council. He served as a theological consultant to Cardinal Joseph Frings, Archbishop of Cologne. In 1969, he returned to Bavaria, to the University of Regensburg. He founded the theological journal Communio, with Hans Urs von Balthasar, Henri de Lubac, Walter Kasper and other important theologians, in 1972. Communio, now published in seventeen languages, including German, English and Spanish, has become a prominent journal of contemporary Catholic theological thought. Until his election as Pope, he remained one of the journal’s most prolific contributors. In 1976, he suggested that the Augsburg Confession might possibly be recognised as a Catholic statement of faith.

On 24 March 1977, Ratzinger was appointed Archbishop of Munich and Freising. On 28 May of the same year he received episcopal ordination. In the consistory of the following 27 June, he was named Cardinal-Priest of Santa Maria Consolatrice al Tiburtino by Pope Paul VI. By the time of the 2005 Conclave, he was one of only 14 remaining cardinals appointed by Paul VI, and one of only three of those under the age of 80. Of these, only he and William Wakefield Baum took part in the conclave. He was the first Diocesan priest for 80 years to take on the pastoral governance of the great Bavarian Archdiocese.

On 25 November 1981, Pope John Paul II named Ratzinger Prefect of the Sacred Congregation for the Doctrine of the Faith, formerly known as the “Sacred Congregaton of the Holy Office,” the historical Inquisition. Consequently, he resigned his post at Munich in early 1982. He was promoted within the College of Cardinals to become Cardinal Bishop of Velletri-Segni on 5 April 1993. He was President of the Preparatory Commission for the Catechism of the Catholic Church, which after six years of work (1986-1992) presented the new Catechism to the Holy Father. On 6 November 1998 the Holy Father approved the election of Cardinal Ratzinger as Vice-Dean of the College of Cardinals, submitted by the Cardinals of the Order of Bishops. On 30 November 2002 he approved his election as Dean; together with this office he was entrusted with the Suburbicarian See of Ostia.

On 19 April 2005, Cardinal Ratzinger was elected as the successor to Pope John Paul II on the second day of the papal conclave after four ballots. Before his first appearance at the balcony of Saint Peter’s Basilica after becoming pope, he was announced by Jorge Medina Estévez, Cardinal Protodeacon of the Holy Roman Church. Cardinal Medina Estévez first addressed the massive crowd as “dear(est) brothers and sisters” in Italian, Spanish, French, German and English, with each language receiving cheers from the international crowd, before continuing with the traditional Habemus Papam announcement in Latin.

On 24 April, he celebrated the Papal Inauguration Mass in St. Peter’s Square, during which he was invested with the Pallium and the Ring of the Fisherman. Then, on 7 May, he took possession of his Cathedral church, the Archbasilica of St. John Lateran. During his inaugural Mass, the previous custom of every cardinal submitting to the Pope was replaced by having twelve people, including cardinals, clergy, religious, a married couple and their child, and newly confirmed people, greet him. (The cardinals had formally sworn their obedience upon his election.) He began using an open-topped papal car, saying that he wanted to be closer to the people. Pope Benedict has continued the tradition of his predecessor John Paul II and baptises several infants in the Sistine Chapel at the beginning of each year, in his pastoral role as Bishop of Rome. Pope Benedict XVI has re-introduced several papal garments which had previously fallen into disuse. Pope Benedict XVI resumed the use of the traditional red papal shoes, which had not been used since early in the pontificate of Pope John Paul II. Contrary to the initial speculation of the press that the shoes had been made by the Italian fashion house Prada, the Vatican announced that the shoes were provided by the pope’s personal shoemaker.

On 21 December 2005, the pope began wearing the camauro, the traditional red papal hat usually worn in the winter. It had not been seen since the pontificate of Pope John XXIII (1958–1963). On 6 September 2006 the pope began wearing the red cappello romano (also called a saturno), a wide-brimmed hat for outdoor use. Rarely used by John Paul II, it was more widely worn by his predecessors.

Pope Benedict is known to be deeply interested in classical music, and is an accomplished pianist. He has a grand piano in his papal quarters. The Pontiff’s favorite composer is Wolfgang Amadeus Mozart. Pope Benedict has recorded an album of contemporary classical music in which Benedict sings and recites prayers to the Blessed Virgin Mary. The album was set for release on 30 November 2009. Pope Benedict is also known to be fond of cats. As Cardinal Ratzinger he was known to look after stray cats in Rome.

His many publications are spread out over a number of years and constitute a point of reference for many people specially for those interested in entering deeper into the study of theology. In 1985 he published his interview-book on the situation of the faith (The Ratzinger Report) and in 1996 “Salt of the Earth”. On the occasion of his 70th birthday the volume “At the School of Truth” was published, containing articles by several authors on different aspects of his personality and production. Pope Benedict is the founder and patron of the Ratzinger Foundation, a charitable organisation, which makes money from the sale of his books and essays in order to fund scholarships and bursaries for students across the world.