Platini — He never did win the FIFA World Cup™, the ultimate prize for a footballer. In fact, it is the only trophy missing from Platini’s impressive trophy cabinet, but that surely does not detract from his status as a footballing legend. His technical ability, reading of the game and amazing ruthlessness in front of goal made him one of the game’s all-time greats.

Yet above and beyond these exceptional talents, the captain of Les Bleus was also the epitome of intelligence and elegance, and it was these qualities that forever etched the name of Platini in the hearts of the fans.

Bringing France to the Top

The famous number 10 made his first FIFA World Cup ™ appearance in 1978 at almost 23 years of age. It proved to be a learning experience as he was unable to steer France – who hadn’t qualified for the finals since 1966 – beyond the first round. Their plight wasn’t helped by a tough draw, which grouped them with two of the favourites, Argentina and Italy. As expected, ‘Les Bleus’ were eliminated at the first hurdle, but not before Platini struck against future world champions Argentina – his first ever FIFA World Cup ™ goal.

In 1981, just as he did four years earlier against Bulgaria and just as he would four years later against Yugoslavia, Platini scored the crucial goal which ensured qualification to a major tournament. A sumptuous free-kick against Holland at the Parc des Princes in Paris sealed France’s passage to the 1982 FIFA World Cup ™.

Platini began carving his name in FIFA World Cup ™ history that year. Just prior to the tournament he had agreed terms to join Juventus the coming season, and who can now look back at Spain 82 without remembering the magnificent semi-final in Seville between France and West Germany? In this all-time classic encounter, Platini scored the equalising penalty and displayed all his trademark organisational talents. Never before had French football fans shed so many tears and felt so unjustly treated. An image which lingers is Platini the captain holding the hand of the unconscious Patrick Battiston as he was carried away on a stretcher. “That night I went through a scaled down version of a lifetime’s worth of emotions”, he was to recall later on.

Platini was at the peak of his powers in 1984, leading the French to their first major international honour, on home soil, at the UEFA European Championship. Platoche, as he was now affectionately referred to by his countrymen, scored a record nine goals in five matches, including ‘perfect’ hat-tricks (a goal with either foot and one with his head) against Belgium and Yugoslavia.

Platini’s achievements in ‘84 no longer raised any eyebrows in Italy, though, where they had become used to seeing Juventus – spearheaded by the Frenchman or ‘Francese’ – dominate on the domestic front. Wearing the famous black-and-white stripes of the Old Lady, Platini accumulated a host of titles and honours: two Italian Championships, one Coppa Italia, one UEFA Cup-Winners’ Cup, one European Super Cup, one UEFA Champions League and one Intercontinental Cup…he was also the ‘capocannoniere’ (leading goalscorer) in Italy and ‘Ballon d’or’ winner for three consecutive seasons. Some record!

”If a FIFA World Cup ™ tournament had been held every year between 1982 and 1986, France would have won two or three,” he pointed out at the twilight of his career. But although France made it through to the FIFA World Cup ™ finals for the third time in succession at Mexico ‘86, West Germany were to prove their nemesis yet again. The Germans’ superior fitness and realistic approach helped them to semi-final glory, but it was the spellbinding French midfield foursome of Michel Platini, Alain Giresse, Jean Tigana and Luis Fernandez, affectionately known as the ‘carré magique’ (or ‘magic square’), that left an indelible mark on the game. Their flair and panache came to the fore in a majestic last sixteen performance against Italy and above all an unforgettable quarter-final clash against Brazil in Guadalajara, which Pelé referred to as the “game of the century”. Naturally enough, Platini found the net in both games.

But the “Beautiful Game” was now taking its toll on the great man: injuries were plaguing him, notably a swollen ankle which he nursed for months, and the Heysel tragedy left a deep psychological scar on Platini, whose philosophy on football, as with life, is first and foremost about enjoyment. A Platini penalty saw Juventus defeat Liverpool to win the European Cup, but “that night had nothing to do with football. They had to bring us the cup in the dressing room,” he later explained. 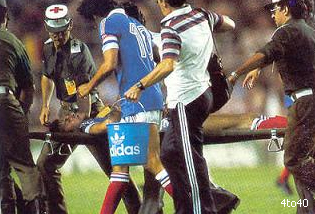 After hanging up his boots in 1987, Platini became manager of the French national side. He quickly gave Didier Deschamps his first cap and paired up the strike duo of Cantona and Papin. This new generation strung together an incredible unbeaten sequence of matches, stretching from April 1989 to February 1992, as France won all its qualifying matches for the European Championship. But when his side failed to make it past the first round at the tournament proper in Sweden, Platini stepped down as manager.

When France secured the privilege of hosting the 1998 FIFA World Cup™, Platini again answered his country’s call. He accepted the challenge to work as co-president of the French Organising Committee alongside Fernand Sastre, who had masterminded the French bid. As usual Platini carried out his duties with great panache, before lending his support to Joseph S. Blatter during his campaign for the FIFA presidency. He has since been elected vice-president of the French Football Federation (FFF), and his brief of responsibilities continues to widen in the highest echelons of the sport – in order “to give something back to the game has given me so much”, he is fond of saying.