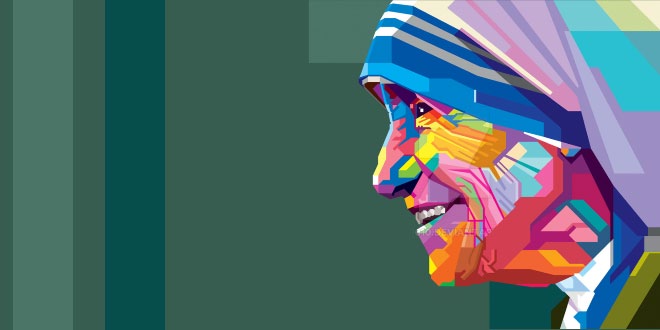 Mother Teresa — Saint Mother Teresa is perhaps the greatest human being who has ever lived in this world. She was beatified by Pope John Paul II in October 2003. She had only one aim in life, to serve the poor, the destitute, the needy and all those who were dejected by the society. She founded an institution, known as ‘the Missionary of Charity’ to help her in fulfilling this aim.

Read on this biography to know more about Saint Mother Teresa.

As per her life history, she was born as Agnes Gonxha Bojaxhiu on 26th August 1910. At the young age of twelve, Agnes started to feel disinterest in the worldly affairs. By the age of eighteen, she was determined to become a nun and left her home to join the Convent of Our Lady of Loreto in Dublin. She undertook the name Teresa in the year 1931 and at the same time, she took her vows.

Mother Theresa came to Calcutta (now Kolkata, India) in the year 1937 and joined St. Mary’s High School. It was here that she fully comprehended her true calling in life, which was to serve the needy and rejected people of the society.

To help her in attaining her goal in life, she wanted to start a diocesan congregation. However, for this she required the permission of the Vatican. The permission came in 1950 and thus was born ‘the Missionary of Charity’. In 1965, she was awarded a Decree of Praise by Pope Paul VI and with this, she received the permission to expand her order to other countries. Today, the Missionaries of Charity boasts of 4,000 nuns and branches in 133 countries of the world.

Mother Teresa was awarded the Noble Peace Prize in the year 1979. She accepted the prize as a representative of the ‘poorest of the poor’. She breathed her last on September 5, 1997, leaving behind a legacy of love and sacrifice.

There have been countless attempts to portray Teresa as a messiah of the poor, despite several accounts showing the dark reality behind most of her initiatives.

Often called a ‘saint’ and ‘messiah of the poor’ by adherents of the Vatican in India, the so-called ‘Mother’ Teresa is engulfed in numerous controversies and allegations, from converting the dying to making patients defecate in front of each other.

Born in Skopje (then a part of the Ottoman Empire), the Albanian nun followed the Roman Catholic sect of Christianity. After a few years of living in the Ottoman Empire, she moved to Ireland and subsequently to India (where she breathed her last in Calcutta).

In India, she started a Non-Government Organisation called ‘Missionaries of Charity’ that has long been accused of forcefully converting people on the pretext of “social service”. Despite having a cult following in India and being directly backed by the Vatican, many American news outlets like Huffington Post, New York Times and Washington Post couldn’t suppress their disgust at the sight of pitiful conditions in the “hospitals” and “orphanages” run by the missionaries.

Highly primitive medical practices were adopted in the hospitals run by the Christian missionaries, who despite claiming to care for HIV/AIDS patients, used re-used hypodermic needles on patients in the name of “simplicity”. Another instance he’s described in an article of The NY Times says that patients were made to defecate in front of each other due to the primitive facilities provided in the hospitals. Medicines which expired 10-20 years ago were administered on patients, and faeces stained blankets were washed in the same sink as dishes and utensils. Such was the condition of “hospitals” run by the Christian missionaries.

A 2013 study by the University of Ottawa was cited by HuffPost in an article about ‘Mother’ Teresa. The study revealed that all claims of her ‘generosity’ were nothing more than an aggressive media campaign by the Catholic Church. The study says–

“Although she had 517 missions in 100 countries at the time of her death, the study found that hardly anyone who came seeking medical care found it there. Doctors observed unhygienic, even unfit conditions, inadequate food, and no painkillers — not for lack of funding, in which Mother Theresa’s world-famous order was swimming, but what the study authors call her ‘particular conception of suffering and death’.”

The Mother of Indian Catholics once told an unamused Christopher Hitchens- “There is something beautiful in seeing the poor accept their lot, to suffer it like Christ’s Passion. The world gains much from their suffering,”. This showed the sadistic pleasures she derived from seeing the poor suffer.

The sadistic history of Teresa doesn’t end here, with the Washington Post reporting that dying patients in hospitals run by the missionaries were forced to convert to Christianity before they died. To back this claim, the Washington Post cited the book ‘Mother Teresa of Calcutta: A Personal Portrait’ by Leo Maasburg.

In 1994, Christopher Hitchens and Journalist Tariq Ali released a documentary film called ‘Hell’s Angels’ which brought the disgusting reality of Teresa’s organisations in front of the public.

In 2015, RSS Sarsanghchalak Shri Mohan Bhagwat during the inauguration of an orphanage in Rajasthan said, “It’s good to work for a cause with selfless intentions. But Mother Teresa’s work had ulterior motives, which was to convert the person who was being served to Christianity”.

Teresa had made a business out of charity, and even after her death the Missionaries of Charity has been under public scrutiny numerous times, with the most recent being a human trafficking scandal that was exposed in 2018 by law enforcement agencies.

In 2018, an orphanage running in Jharkhand’s Ranchi by the Missionaries of Charity was caught selling a 14-day old baby. This prompted the arrest of 2 women employees of the centre by the Jharkhand Police after intervention by the Child Welfare Committee. A sum of ₹1,40,000 was recovered from the centre.

There have been countless attempts to portray Teresa as a messiah of the poor, despite several accounts showing the dark reality behind most of her initiatives. Claiming to be a social service-oriented organisation, the Missionaries of Charity was nothing short of a ‘wolf in a sheep’s clothing’ that devoured the poor of their religion and stripped them of their dignity with primitive medical practices.

Previous Sushant Singh Rajput Case: 8 Hard Drives
Next Muharram: What is the tragedy at Karbala?