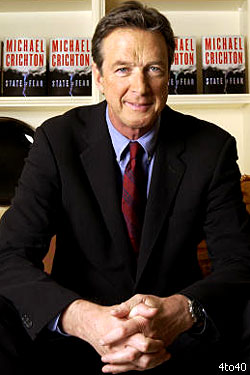 Michael Crichton — John Michael Crichton, was an American author, film producer, film director, medical doctor, and television producer best known for his science fiction and techno-thriller novels, films, and television programs. His books have sold over 150 million copies worldwide. His works were usually based on the action genre and heavily feature technology. Many of his future history novels have medical or scientific underpinnings, reflecting his medical training and science background. He was the author of The Andromeda Strain, Congo, Disclosure, Rising Sun, Timeline, State of Fear, Prey, and Next. He was also the creator of ER, but most famous for being the author of Jurassic Park, and its sequel The Lost World, both adapted into high grossing films and leading to the very successful franchise. The final book he published before his death was Next, and he also had another project set for some time in 2009.

Crichton was born in Chicago, Illinois, to John Henderson Crichton and Zula Miller Crichton, and raised on Long Island, in Roslyn, New York. He has two sisters, Kimberly and Catherine, and a younger brother, Douglas.

While in medical school, he wrote novels under the pen names John Lange and Jeffery Hudson. A Case of Need, written under the latter pseudonym, won the 1969 Edgar Award for Best Novel. He also co-authored Dealing with his younger brother Douglas under the shared pen name Michael Douglas. The back cover of that book contains a picture of Michael and Douglas at a very young age taken by their mother.

His two pen names were created as a play on his above-average height. According to his own words, he was about 2.06 meters (6 feet 9 inches) tall in 1997. Lange is a surname in Germany, meaning “tall one” and Sir Jeffrey Hudson was a famous 17th century dwarf in the court of Queen Consort Henrietta Maria of England.

Crichton admitted to having once, during his undergraduate study, plagiarized a work by George Orwell and submitted it as his own. According to Crichton, the paper was received by his professor with a mark of “B−”. Crichton claimed that the plagiarism was not intended to defraud the school, but rather as an experiment. Crichton believed that the professor in question had been intentionally giving him abnormally low marks, and so as an experiment Crichton informed another professor of his idea and submitted Orwell’s paper as his own work. His issues with the English Department led Crichton to switch concentrations from English to anthropology.

Crichton was also the creator and executive producer of the television drama ER. ER was originally slated to be a movie, directed by Steven Spielberg. However, during the early stages of pre-production, Spielberg asked Michael Crichton what his current project was. Crichton said he was working on a novel about dinosaurs and DNA. Spielberg subsequently dropped what he was doing to film this project. Afterwards, he returned to ER and helped develop the show, serving as a producer on season one and offering advice (he insisted on Julianna Margulies becoming a regular, for example). It was also through Spielberg’s Amblin Entertainment that John Wells was contacted to be the show’s executive producer.

The mob came down the road; it came – a group of infuriated men – …