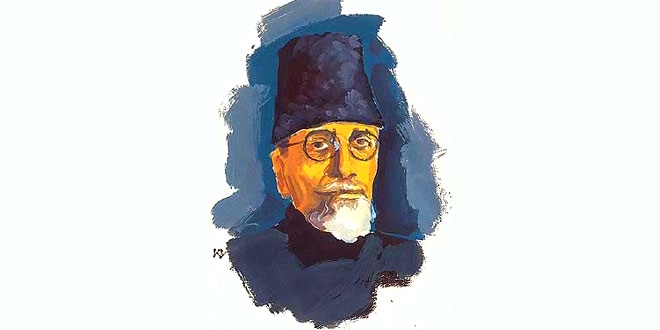 Maulana Abul Kalam Azad — Maulana Abul Kalam Muhiyuddin Ahmed Azad, was an Indian Muslim scholar and a senior political leader of the Indian independence movement, who lived from 11 November 1888 – 22 February 1958. He was one of the most prominent Muslim leaders to support Hindu Muslim unity, opposing the partition of India on communal lines. Following India’s independence, he became the first Minister of Education in the Indian government. He is also known for having predicted the future military rule and partition of Pakistan before its independence. He was posthumously awarded India’s highest civilian award, the Bharat Ratna in 1992. He is commonly remembered as Maulana Azad; he had adopted Azad (Free) as his pen name. His contribution to establishing the education foundation of India is recognized by celebrating his birthday as National Education Day across India.

The maker of phrases survives the maker of things in history. “There is nothing so swiftly forgotten,” says Gore Vidal, “as the public’s memory of a good action. This is why great men insist on putting up monuments to themselves with their deeds carefully recorded since those they served will not honour them in life or in death. Heroes must see to their own fame. No one else will.”

A British historian of south Asia noticed how differently those who supported the movement for Pakistan have come to be remembered as compared with those who devoted themselves to Indian nationalism. Mohammad Iqbal’s tomb of sandstone, lapis lazuli and white marble is a place of pilgrimage. Mohammed Ali Jinnah’s mazar is a symbol of Pakistan’s identity and one of the first places to which the visitor to Karachi is taken.

Maulana Abul Kalam Azad’s mausoleum before the Jama Masjid in Delhi, on the other hand, is not greatly frequented. The relative neglect of his tomb suggests that many Indian Muslims may have lost interest in keeping his memory alive. It also suggests that Indian society as a whole may no longer value, as before, and perhaps may not even know the principles for which he stood.

It is not at all surprising why history books in Pakistan make no mention of Azad, except to echo the Quaid-i-Azam’s view that he was a Muslim “showboy” Congress president. What is surprising is how a man of Azad’s stature has been submerged beneath the rationalization of the victors – the founders of Pakistan – in our own country. This is the man whom Jawaharlal Nehru called “a very brave and gallant gentleman, a finished product of the culture that, in these days, pertains to few”.

Azad was the Mir-i-Karawan (the caravan leader), said Nehru. That he wasn’t. Though not detached from the humdrum of political life, he was not cut out to be an efficient political manager. He was comfortable being a biographer rather than a leader of a movement. He was not somebody who traversed the dusty political terrain to stir the masses into activism. That is why he settled for Gandhi’s leadership, acted as one of his lieutenants during the Civil Disobedience Movement in 1930-32, and steered the Congress ship through the high tide of the inter-War years.

He spent years in jail, where some of his prison colleagues thought of him as an “extraordinarily interesting companion”, with “an astonishing memory” and encyclopedic information. More importantly, a point is that the Maulana embodied in his position and person perhaps the most important symbol of the Congress aspiration to be a nationalist party. His status was thus the focal point of Gandhi’s clash with Jinnah, who maintained that politically no one but a Muslim Leaguer could represent Muslim interests.

Sardar Patel, the hero of the Bardoli satyagraha and the home minister who carried the princely states to the burning ghat of oblivion, spoke and acted from the lofty heights of majoritarianism. Azad, caught up in the crossfire of Hindu and Muslim communalists, did not occupy the same vantage point. He had to play his innings on a sticky turf in rough weather. On occasions, his own party colleagues thwarted his initiatives and turned him into just a titular Congress head during, for example, the vital negotiations with both the Cripps and the Cabinet missions.

The strident Muslim Leaguers, on the other hand, decried him as a ‘renegade’. Yet this elder statesman, sitting silently and impassively at Congress meetings, as he always did, with his pointed beard, remained, until the end, consistent in his loyalty to a unified Indian nation. Time and time again, he repudiated Jinnah’s two-nations theory. He reaffirmed: “It is one of the greatest frauds on the people to suggest that religious affinity can unite areas which are geographically, economically, linguistically and culturally different.” With an insight rare for those from his background, he pointed out that the real problems of the country were economic, not communal. The differences related to classes, not to communities.

Essentially a thinker and the chief exponent of Wahdat-i-deen or the essential oneness of all religions, Azad played around with a variety of ideas on religion, state and civil society.

Thoughtful and reflective, he had a mind like a razor, which cut through a fog of ideas (Nehru). Lesser men during his days found conflict in the rich variety of Indian life. But he was big enough not only to see the essential unity behind all that diversity but also to realize that only in unity was there hope for India as a whole. He was a man on the move, his eyes set on India’s future which was to be fashioned on the basis of existing cross-community networks. His unfinished Tarjuman-al-Quran was easily the most profound statement on multiculturalism and inter-faith understanding. His political testament, delivered at the Congress session in 1940, was a neat and powerful summation of the ideology of secular nationalism:

”I am proud of being an Indian. I am part of the indivisible unity that is Indian nationality. I am indispensable to this noble edifice and without me this splendid structure is incomplete. I am an essential element, which has gone to build India. I can never surrender this claim.”

To a region that has experienced the trauma of Partition the life of Azad shows how during the freedom struggle there were Muslims who worked for the highest secular ideals. To a region beset by religious intolerance the life of Azad reveals how the finest religious sensibility can fashion the most open and humane outlook in private and public life.

(Come along, I will show you what remains in the city’s slaughterhouse,
These are the shrines of the pious, and here the graves of those with honesty and conviction).