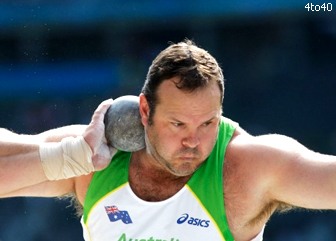 In Beijing Justin Anlezark joined countryman Scott Martin in the shot put, making it the first Olympics since Melbourne in 1956 that Australia was represented by two male shot putters.

A solid opening throw (19.91m) put Justin in a strong position to make the final of the Olympics. However, unable to improve on that mark, he exited the competition in the qualifying round, finishing ninth in group B and 16th overall.