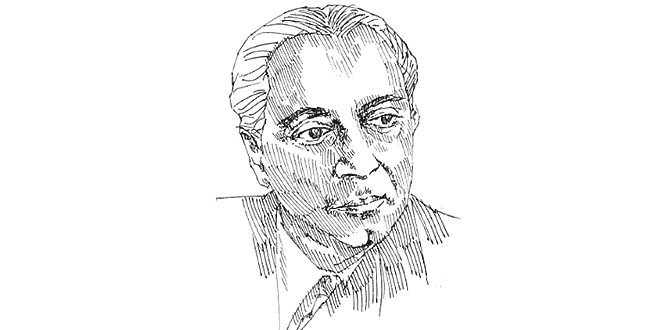 Homi Jahangir Bhabha (H. J. Bhabha) Cosmic rays are fast-moving, extremely small particles coming from outer space. When these particles enter the earth’s atmosphere, they collide with the atoms in the air and produce showers of electrons. In 1937, Homi Jahangir Bhabha, an Indian physicist, and W. Heitler, a German physicist, solved the mystery surrounding these rays and became world famous.

Bhabha went a step further. He recognized the presence of a new nuclear particle in the showers, which he called “meson“. In this particle he also found experimental proof of Einstein‘s theory of relativity.

In 1940 this young physicist returned to his homeland from England. War had broken out in Europe and science, like everything else, was geared to the purposes of war and destruction.

He joined the Indian Institute of Science, Bangalore, and began to do research on cosmic rays, with huge retrievable plastic balloons carrying instruments high up in the sky. Cosmic rays and revealed some revolutionary facts about the nature of matter and research, he thought, might reveal still more on this subject. And, if research in cosmic rays could be taken up in the country, Indian scientists could, within a short time, be in the forefront in physics. Modern techniques in nuclear, high energy and elementary particle physics could also be developed in the country. He wanted to have an institute exclusively developed to research in this field.

Meanwhile, Bhabha was elected Fellow of the Royal Society for his contributions relating to cosmic rays, elementary particles and quantum mechanics. His voice commanded attention and all scientists supported his idea of building a research institute. Bhabha was related to the Tatas, the country’s pioneering industrialists. In 1944 he wrote a letter to the Tata Trustees urging them to build an institute. He argued that the country would not then have to look abroad for experts when nuclear plants for electric power generation came to be built. While other scientists were trying to tap energy from the atom for destructive purposes, he was thinking of its peaceful uses.

In 1945, the Tata Institute of Fundamental Research was set up. Two years later, when the country gained independence, his ideals gained more significance. Jawaharlal Nehru, the first Prime Minister, also wanted to make the country self-sufficient in science and technology and he gave Bhabha a free hand to do what he wanted.

In 1948 the Atomic Energy Commission was set up and Bhabha made its Chairman. From then on, nuclear energy research has steadily gathered momentum in the country. Under the expert guidance of Bhabha, three atomic reactors, Apsara, Cirus and Zerlina, were built. Survey for uranium ore continued and plants to purify the required materials were also built.

Construction of the country’s first atomic power station began at Tarapur in 1963. Two years later a plutonium plant was installed, which was hailed as a “great step”. In short, Bhabha showed his countrymen and the world that Indians were second to none in gaining scientific knowhow. The climax came on May 18, 1974, when Indian scientists exploded a nuclear device for peaceful purpose at Pokhran in Rajasthan. India became the sixth country to join the nuclear club.

Homi Jahangir Bhabha also encouraged research in electronics, space science, radio astronomy and microbiology. The telescope at Ootacamund is one of his creations. He was also one of the eminent members of the “atom for peace” conference. It was during one of his visits abroad that he died in a plane crash at the age of 57. The nation mourned his sudden death. In 1967, the Atomic Energy Establishment, Trombay, was renamed the Bhabha Atomic Research Center as a tribute to his dedication and work.

Homi Jahangir Bhabha was born on October 30, 1909, into a wealthy Parsi family. He had a good library of science books at home and even as a child was interested in science. He used to spend his spare time in painting and writing poetry. He was also fond of music, particularly the Western classics. His father’s ambition was to train Bhabha as an engineer and he was sent abroad for higher studies. However, his interest shifted to physics. During his studies abroad he won many medals and fellowships. He also got the opportunity to work with eminent physicists like Enrico Fermi and Wolfgang Pauli.

Homi Jahangir Bhabha was bachelor. He used to say that he was “married to creativity”. He was a first class painter. His pencil sketches are well known and some of his paintings are preserved in British art galleries. He was a man of refined taste and this was very evident whether it was in the choice of design for the building of the Tata Institute of Fundamental Research or the site for the Ooty radio telescope.