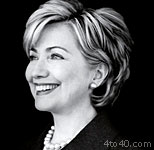 Hillary Rodham Clinton — Hillary Diane Rodham Clinton was born on October 26, 1947 at Edgewater Hospital in Chicago, Illinois. Her father, Hugh Ellsworth Rodham, was the son of Welsh and English immigrants, he managed a successful small business in the textile industry. Her mother, Dorothy Emma Howell, is a homemaker of English, Scottish, French, French Canadian, and Welsh descent. She has two younger brothers, Hugh and Tony.

As a child, Hillary Rodham was a teacher’s favorite and earned numerous awards. She attended Maine East High School, where she participated in student council, the school newspaper, and was selected for National Honor Society. For her senior year, she was redistricted to Maine South High School, where she was a National Merit Finalist and graduated in the top five percent of her class of 1965. Her mother wanted her to have an independent, professional career, and her father, otherwise a traditionalist, held the modern notion that his daughter’s abilities and opportunities should not be limited by gender.

At age thirteen Rodham helped canvass South Side Chicago following the very close 1960 U.S. presidential election, where she found evidence of electoral fraud against Republican candidate Richard Nixon. She then volunteered to campaign for Republican candidate Barry Goldwater in the U.S. presidential election of 1964. Rodham’s early political development was shaped most by her high school history teacher, who introduced her to Goldwater’s classic The Conscience of a Conservative, and by her Methodist youth minister with whom she saw and met civil rights leader Martin Luther King, Jr., in Chicago in 1962.

In 1965, Rodham enrolled at Wellesley College, where she majored in political science. During her freshman year, she served as president of the Wellesley Young Republicans with this Rockefeller Republican-oriented group, she supported the elections of John Lindsay and Edward Brooke. Rodham then entered Yale Law School, where she served on the editorial board of the Yale Review of Law and Social Action. During her second year, she worked at the Yale Child Study Center, learning about new research on early childhood brain development and working as a research assistant on the seminal work, Beyond the Best Interests of the Child (1973). She also took on cases of child abuse at Yale-New Haven Hospital and volunteered at New Haven Legal Services to provide free legal advice for the poor. She was recruited by political advisor Anne Wexler to work on the 1970 campaign of Connecticut U.S. Senate candidate Joseph Duffey, with Rodham later crediting Wexler with providing her first job in politics.

In the late spring of 1971, she began dating Bill Clinton, also a law student at Yale. She received a Juris Doctor degree from Yale in 1973, having stayed on an extra year to be with Clinton. Clinton first proposed marriage to her following graduation, but she declined. She began a year of postgraduate study on children and medicine at the Yale Child Study Center. During her postgraduate study, Rodham served as staff attorney for Edelman’s newly founded Children’s Defense Fund in Cambridge, Massachusetts, and as a consultant to the Carnegie Council on Children. During 1974, she was a member of the impeachment inquiry staff in Washington, D.C., advising the House Committee on the Judiciary during the Watergate scandal. In August 1974, Hillary moved to Fayetteville, Arkansas, and became one of only two female faculty members in the School of Law at the University of Arkansas, Fayetteville, where Bill Clinton also teaching and running for a seat in the U.S. House of Representatives. She gave classes in criminal law, where she was considered a rigorous teacher and tough grader, and was the first director of the school’s legal aid clinic. She still harbored doubts about marriage, concerned that her separate identity would be lost and that her accomplishments would be viewed in the light of someone else’s.

Hillary Rodham and Bill Clinton bought a house in Fayetteville in the summer of 1975, and Hillary finally agreed to marry. Their wedding took place on October 11, 1975, in a Methodist ceremony in their living room. She announced she was keeping the name Hillary Rodham, to keep their professional lives separate and avoid apparent conflicts of interest and because “it showed that I was still me,” although her decision upset their mothers (Mother-in-law Virginia Clinton Kelley and Dorothy Emma Howell).