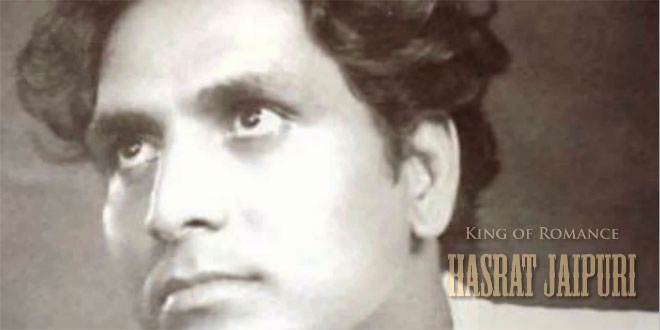 Hasrat Jaipuri is one of those celebrated poets who have gone down as immortal in the history of Hindi film songs. A poet who composed lines in Urdu, Persian and Hindi, he went on to become one of the most popular lyricists that the Hindi film industry in India has ever seen. His poetry and film compositions reflected an amalgamation of both Hindi and Urdu. Born in a Muslim family of Rajasthan in India, poetry was a part of Hasrat Jaipuri’s life from the early years of his childhood. Once a bus conductor by profession, little did the world know then that there was so much talent hidden within Hasrat Jaipuri, who may be referred to as a ‘shayar’ in Indian society.

Hasrat Jaipuri was born as Iqbal Husain in a Muslim family of Rajasthan on April 15, 1922. Iqbal spent his entire childhood in the city of his birth, Jaipur, before shifting to Bombay where he received the best rewards for his talent of poem and song writing. Iqbal Husain was educated in only English language during the initial years of his schooling. It was later that Iqbal Husain received the title of Hasrat Jaipuri and also started his education in Urdu and Persian languages. Hasrat Jaipuri’s grandfather Fida Husain was his chief tutor for both the languages. By this time, Hasrat Jaipuri was already a young man of 20. He not only learnt the two languages of Urdu and Persian, he also composed several verses in both languages. Many of his verses were composed for the love of his life Radha, a Hindu girl residing in Jaipur. The two fell in love when Hasrat Jaipuri had started writing his own poems in Urdu, Persian and also Hindi. “Yeh Mera Prem Patra Padh Kar, Ke Tum Naaraaz Na Hona” was one of the most famous lines found in his love letter to Radha. The line was immortalized almost twenty years later in a Hindi song filmed on the Bollywood heartthrob, Raj Kapoor in his film ‘Sangam’. Hasrat Jaipuri was a die hard romantic who was of the opinion that love should not be categorized by religion and castes. Hasrat Jaipuri had famously said in an interview that he never expected his love to be reciprocated by Radha, and yet he loved her dearly.

Career As A Poet

Hasrat Jaipuri was equally popular as a poet and a lyricist. He wrote several poems, which were later published in his books of poetry in Hindi and Urdu. It was these two languages that found predominant use in his writings. Hasrat Jaipuri felt that both the Hindi and Urdu languages complement each other and one is incomplete without the other. Hasrat Jaipuri thought of himself as a messenger whose main motive was to spread love through his work. All his writings reflected this sentiment of Hasrat Jaipuri. According to him, he was a ‘shayar’ who existed in the world to fill each empty space with love. He was deeply aware of the fact that he would die soon, therefore as long as he is in this world, he believed it was his duty to spread love and cheer all over.