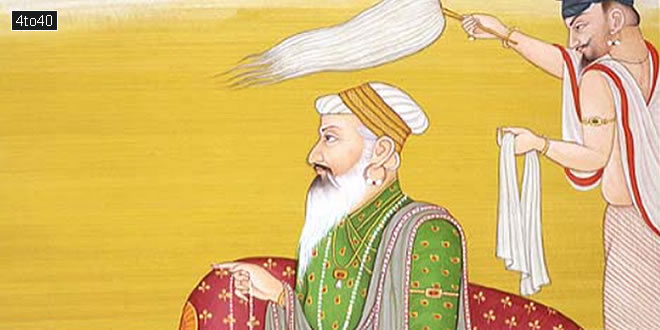 The real name of Guru Ram Das Ji was Bhai Jetha Ji who became an orphan at the age of 7. Later he became the servant of 3rd Guru Amar Dass Ji and also his son-in-law. Guru Ka Chak or Ram Dass Pura which later became the focal point for the Sikh Tradition with the name Amritsar Sahib was founded by the Fourth Master Sri Guru Ram Das Ji. He started Masand System in Guru Ghar to collect revenue from Sangat for Building Sikh Temples and other activities.

Born in a humble family, Ram Das (called Jetha) used to devote his spare time in the service of the Guru, after his daily vocation of selling sweetened wheat to the pilgrims at Goindwal. Guru Amardas selected him as his son-in-law and got his daughter Bibi Bhani married to him, finding him handsome young, and obedient.

He has contributed 679 hymns to the Guru Granth Sahib. His poetry is full of Vairagya (detachment), sincerity, and devotion to the Lord, He founded the city of Amritsar (Ramdaspur). He encouraged his followers to join in trade and business including horses. Thus Amritsar grew up in a prosperous city of the North. The Sikhs became good traders in jewelry, embroidery works, and horses, going up to Kabul for business, apart from farming and petty shop-keeping.

Shri Guru Ramdas Ji was born in the market Chuna Mandi of Lahore city, Pakistan, on 24 September 1534. Being the eldest son, neighbors and relatives used to call you firstborn. In this way, the name you became ‘Jetha’ in place of Ram Das. You were still very young when your mother passed away.

Haridas Ji used to do petty-shop only, from which he would have earned a simple income. He was not Haridas in name but actually a devotee of Hari in true meanings. He was a formless worshiper and had no belief in corporeal deities and idol worship at all. He was the owner of a very sweet and contented nature. At a very young age, he used to experience satisfaction, and most of the time by serving the needy he kept trying to attain spiritual bliss. A tragedy had befallen the child Ramdas Ji when his father renounced the mortal body, Jatha Ji being just 7 years old. Haridas Ji’s mother-in-law and father-in-law came to Lahore to mourn and took their grandson Jetha Ji to Basarke village while rolling.

Now the upbringing of child Ramdas (Jetha) Ji started in Basarke village itself. On these days Shri Amardas Ji went to Haridwar for the twentieth time to bathe in the Ganges, but on his return, a Vaishno sage made fun of him for being without a guru and went away without eating in disgust. Because of this, there was a deep blow in his heart. In search of the ‘True Guru’, you reached Khadoor Nagar under the shelter of Sri Guru Angad Dev Ji and devoted yourself to Guru’s service there, but once or twice a year you reached home to meet your loved ones to discuss the spiritual wisdom. In these meetings, the child Ramdas (Jetha) Ji would also reach and listen very carefully to the discussion of such high thoughts.

Seeing the curiosity of child Ram Das, Shri Amar Das would have been very impressed. In this way, he liked him and he had a great deal of affection for this orphan child in his heart because of his discreet intellect.

Time passed. He received his early education in the school of village Basarke. He was a master of sharp intellect, so he would always be a leader among other students. Teachers would always be happy with you, but your maternal grandfather died suddenly. Therefore, you had to work hard only at the age of twelve to earn a living by leaving your education midway. First of all, your maternal grandmother sent you Ghungnia (boiled chana) to her village Basarke to sell, but the sales here would have been negligible. Even after hard work, one does not get enough money to survive.

In those days you came to know that according to the orders of Shri Guru Angad Dev Ji, Shri Amardas Ji is setting up a new town named ‘Goindwal’ on the banks of the Beas River, on the banks of the Shahi Marg (Jarnaili Road). After a few days, when the villagers came to know that Shri Guru Amardas Ji along with his family was going for rehabilitation in the new city ‘Goindwal’, then all the Satsangis of the village looked disappointed and sad, but Kishore Ramdas (Jetha) Ji Planned very patiently and made a proposal to his maternal grandmother that the new city is full of workers and artisans.

Apart from this, due to the royal route, the traffic also remains in large numbers, so you thought to your maternal grandmother that if I try to run my small business in such places, then there are more chances of walking there because hungry laborers like to consume boiled gram as a short-food form and the travelers also prefer the use of gram.

In this way, I will get a profit in business. And we will be able to earn our livelihood easily. Nani Maa liked this suggestion very much and she gave permission to rehabilitate Jetha Ji in the new city of Goindwal. In this way, Ramdas (Jetha) Ji reached Goindwal under the protection of Shri Amardas Ji along with his maternal grandmother to earn his livelihood.

Ramdas Jetha Ji came to Goindwal and built a small house of his own and started living in it. He would get up early in the morning after toilet-bath would get lost in contemplating the Lord, go to Dharamsala when the sun rises, and do Satsang. When he got time, he used to fan the Sangat or get him to drink water. In this way, his mind was always engrossed in trying to serve the Sangat.

After that, by the time they returned home, Nani Maa would prepare a Chhabri of boiled chickpeas for them. After breakfast, he would often go to the Ghat of Beas river. There would have been an influx of passengers crossing the bridges of the boats at the fall. Here he could sell Chanas a lot to the travelers, and easily got a living, but if some gram would have been saved, he would reach those places during the intermission where the workers and artisans were engaged in the construction work.

Those people would buy their Chanas with great pleasure, in this way you would finish your work of livelihood till evening. Then he would deliver the material for the next day to her grandmother and help her with the household chores. After dinner, you would remain engaged in bhajan-contemplation for a long time in asana.

Sometimes you would even cross the Beas river and reach Shri Guru Angad Dev Ji’s Darshan in his court. Sitting at the feet of the Guru, after receiving education, he would come back and lead a life according to the words of the Guru.

After about five years, when Shri Guru Angad Dev Ji appointed Shri Amardas Ji as his successor by giving him the Guru Gaddi, you felt very happy. As per Gurudev Ji’s orders, when Shri Guru Amar Das Ji made Goindwal his permanent preaching center, Sikh-devout Sangat from far and wide started coming to Goindwal in a big way.

Shri Guru Amardas Ji always arranged langar for the devotees. Now whenever he got the opportunity, Jetha Ji started giving time in the service of langar, his faith in Sikhism was already matured. The dedication of the service of the Sadh Sangat turned into a passion, due to which he started getting some unattainable pleasure from the service. But he did not give up earning from his hard work, he continued the work of selling chickpeas by putting a Chhabri.

In fact, he knew the importance of self-reliance and did not consider the hard-earned livelihood to be less than Guru Bhakti. So you were living a life according to the great Guru’s Updesh of “ਘਾਲਿ ਖਾਇ ਕਿਛੁ ਹਥਹੁ ਦੇਇ”.

After attaining the throne of Shri Guru Amardas Ji, when the work of the court increased, then Bhai Jetha Ji started spending more time at Guru’s court doing seva all day. He would leave other work and welcome the Sangat. If the accomplice would have been satisfied after receiving the hospitality, then he would give them cold water and kept blowing the air with the fan. When everyone was resting, you would clean the utensils and clean the floor for langar. His only goal was to serve. He probably got a great sense of service from his father, Haridas, who had no aspirations for service. To serve selflessly was the only vow of his life. He was satisfied by being ready to serve.

Bhai Jetha Ji’s devotion and devotion to religion were not hidden from Shri Guru Amardas. He also started loving Jetha Ji very much and wanted this love to last forever. Meanwhile, Mata Mansa Devi – wife of Guru Amardas Ji, one day suggested the marriage of her younger daughter, Kumari Bhani, and insisted on finding a suitable groom. Gurudev Ji spontaneously asked him what kind of groom do you want for their daughter. In reply, Mansa Devi Ji pointed a finger toward Bhai Jetha Ji and said – A young man just like him, the one who is always ready in service.

To this, Gurudev said that there cannot be any other youth like Jetha Ji, if you want a son-in-law like him, then you’ll have to accept nobody else but him only. On this Mansa Devi Ji said – You are right, but in this matter, the discussion should be done with daughter Bhani. Then Gurudev Ji called Bhani Ji and wanted to know her will. She replied whatever you think is appropriate, I accept everything.

Sending a message, Gurudev called the servant Jetha Ji and offered him to be their son-in-law. Jetha Ji was stunned to hear this and could not believe his ears. Then Gurudev said to him with great affection – yes it is true, we give you the hand of our daughter Bhani as your life partner. On this Jetha Ji started bowing down at Guru’s feet and with tears in his eyes, said, O Gurudev! I am an orphan stumbling in the streets of Lahore, earning a living by doing a minor scuffle, like the dust of your feet, why are you giving me so much respect.