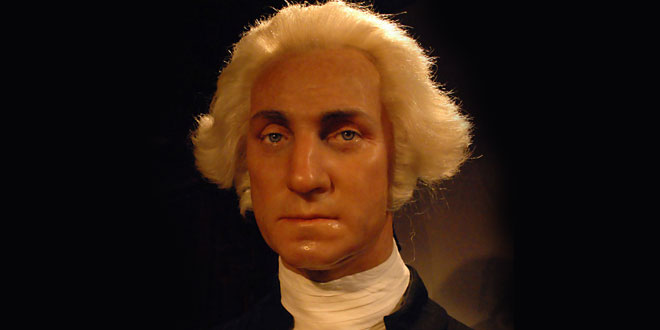 George Washington was born on February 22, 1732. He lost his father at age 11 and his half brother, Lawrence, took over that role. Washington’s mother was protective and demanding, keeping him from joining the British navy as Lawrence wanted. Lawrence owned Mount Vernon, and George lived with him from the age of 16. He was schooled entirely in Colonial Virginia and never went to college. He was good at math which suited his chosen profession of surveying.

Career Before the Presidency

In 1749, Washington was appointed as surveyor for Culpepper County, Virginia after a trek for Lord Fairfax into the Blue Ridge Mountains. He was in the military from 1752-8 before being elected to the Virginia House of Burgesses in 1759. He spoke against Britain’s policies and became a leader in the Association. From 1774-5 he attended both Continental Congresses. He led the Continental Army from 1775-1783 during the American Revolution. He then became the president of the Constitutional Convention in 1787.

Washington joined the Virginia militia in 1752. He created and then was forced to surrender Fort Necessity to the French. He resigned from the military in 1754 and rejoined in 1766 as an aide-de-camp to General Edward Braddock. When Braddock was killed during the French and Indian War (1754-63), he managed to stay calm and keep the unit together as they retreated.

Washington was unanimously named Commander-in-Chief of the Continental Army. This army was no match for the British regulars and Hessians. He led them to significant victories such as the capture of Boston along with major defeats including the loss of New York City. After the winter at Valley Forge (1777), the French recognized American Independence. Baron von Steuben arrived and began training his troops. This help led to increased victories and the British surrender at Yorktown in 1781.

Election as the First President: 1789

Despite being a member of the Federalist Party, Washington was immensely popular as a war hero and was an obvious choice as the first president for both federalists and anti-federalists. He was unanimously elected by the 69 electors. His runner up, John Adams, was named Vice President.

George Washington was able to rise above the politics of the day and carry every electoral vote – 132 from 15 states – to win a second term. John Adams, as runner-up, remained the Vice President.

Washington did not run a third time. He retired to Mount Vernon. He was again asked to be the American commander if the US went to war with France over the XYZ affair. However, fighting never occurred on land and he did not have to serve. He died on December 14, 1799 possibly from a streptococcal infection of his throat made worse from being bled four times.

Washington’s significance cannot be understated. He led the Continental Army to victory over the British. He believed in a strong federal government which greatly influenced the nation during his eight years in office. He did not allow others to trap him as royalty. He worked on the principle of merit. His warning against foreign entanglements was heeded by future presidents. By declining a third term, he set up the precedent of a two-term limit.

Washington’s administration was one of precedents with many standards that are still followed. For example, he relied on his cabinet for advice. Since his cabinet appointments went unchallenged, presidents are generally able to choose their own cabinets. He chose a successor for Chief Justice John Jay from outside the bench instead of based on seniority.

Domestically, Washington was able to stop the first real challenge to federal authority with the suppression of the Whiskey Rebellion in 1794. Pennsylvania farmers were refusing to pay a tax and he sent troops to ensure compliance.

In foreign affairs, Washington was a huge proponent of neutrality. He declared the Proclamation of Neutrality in 1793 which stated that the US would be impartial toward belligerent powers currently in a war. This upset some who felt we owed a greater allegiance to France. His belief in neutrality was reiterated during his Farewell Address in 1796 where he warned against foreign entanglements. This warning became part of the American political landscape.

Washington signed Jay’s Treaty which gave away the United States’ right to neutrality of the seas allowing the British to search and seize anything they found on American ships travelling into ports of Britain’s enemies. In return, the British withdrew from outposts in the Northwest Territory. This forestalled further conflict with Great Britain until 1812.

In 1795, Pinckney’s Treaty helped relations with Spain by creating a boundary between the United States and Spanish held Florida. Further, the US was allowed to travel the entire Mississippi for purpose of trade. In the end, George Washington should be considered one of our most important and influential presidents of all time whose legacy still lives on today.