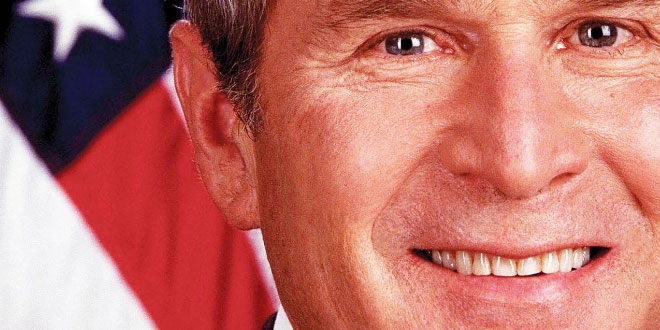 Bush’s upbringing in West Texas, his accent, his vacations on his Texas ranch, and his penchant for country metaphors contribute to his folksy, American cowboy image. “I think people look at him and think John Wayne”, says Piers Morgan, editor of the British Daily Mirror. It has been suggested that Bush’s accent was an active choice, as a way of distinguishing himself from Northeastern intellectuals and anchoring himself to his Texas roots. Both supporters and detractors have pointed to his country persona as reasons for their support or criticism.

Bush’s intelligence has been satirized by the media, comedians, and other politicians. Detractors tended to cite linguistic errors made by Bush during his public speeches, which are colloquially termed as Bushisms. Editorials in Harper’s Magazine, Rolling Stone, The Washington Post, Common Dreams NewsCenter, and The Nation have referred to Bush as “the worst president ever”.

In contrast to his father, who was perceived as having troubles with an overarching unifying theme, Bush embraced larger visions and was seen as a man of larger ideas and associated huge risks.

Following the inauguration of Barack Obama, Bush and his family boarded a presidential helicopter typically used as Marine One to travel to Andrews Air Force Base. Bush, with his wife, then boarded an Air Force Boeing VC-25 for a flight to a homecoming celebration in Midland, Texas. Because he was no longer President, this flight was designated Special Air Mission 28000, instead of Air Force One. After a welcome rally in Midland, the Bushes returned to their ranch in Crawford, Texas, by helicopter. They bought a home in the Preston Hollow neighborhood of Dallas, Texas, where they planned to settle down.

Since leaving office, Bush has kept a relatively low profile. However, he has made appearances at various events throughout the Dallas/Fort Worth area, most notably when he conducted the opening coin toss at the Dallas Cowboys first game in the team’s new Cowboys Stadium in Arlington. An April 6, 2009, visit to a Texas Rangers game, where he gave a speech thanking the people of Dallas for helping them settle in (and specifically, the people of Arlington, where the game was held), was met with a standing ovation.

His first speaking engagement occurred on March 17, 2009, in Calgary, Alberta. He spoke at a private event entitled “A conversation with George W. Bush” at the Telus Convention Centre and stated that he would not criticize President Barack Obama and hoped he succeeds, specifically stating, “[President Obama] deserves my silence.” During his speech, Bush announced that he had begun writing a book, which is expected to be published under the title Decision Points in 2010. The book will focus on “12 difficult personal and political decisions” Bush faced during his presidency. On May 29, 2009, Bush and former President Bill Clinton appeared at a policy discussion at the Metro Toronto Convention Centre, moderated by Frank McKenna, the former Canadian Ambassador to the United States.

Bush made a video-taped appearance on the June 11, 2009, episode of The Colbert Report during the show’s trip to Baghdad, Iraq. Bush praised the troops for earning a “special place in American history” and for their courage and endurance. He joked that it would come in handy, saying, “I’ve sat through Stephen’s stuff before,” in reference to Colbert’s performance at the 2006 White House Correspondents’ Association dinner as well as The Colbert Report’s history of satirising Bush’s administration.

On August 29, 2009, Bush, with his wife Laura, attended the funeral of Senator Ted Kennedy. Bush made his debut as a motivational speaker on October 26 at the “Get Motivated” seminar in Dallas.

In the aftermath of the shooting that took place on November 5, 2009, at the Fort Hood U.S. Army post in Texas, Fox News revealed that Bush and his wife had paid an undisclosed visit to the survivors and victims’ families the day following the shooting, having contacted the base commander requesting that the visit be private and not involve press coverage. The Bushes own a property less than 30 minutes from Fort Hood and spent one to two hours at the base.