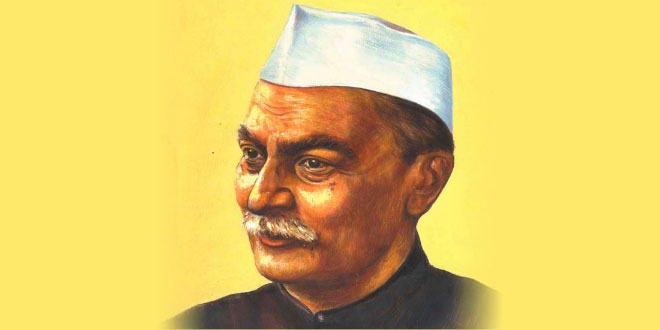 Dr. Rajendra Prasad was born on December 3, 1884 in Ziradei village in Siwan district of Bihar. His father’s name was Mahadev Sahay and his mother’s name was Kamleshwari Devi. Rajendra Prasad was youngest among his siblings. Mahadev Sahay was a Persian and Sanskrit language scholar. He was greatly attached to his mother and elder brother Mahendra.

At the age of five Rajendra Prasad was, according to the practice in the community to which he belonged, put under a Maulavi who taught him Persian. Later, he was taught Hindi and arithmetic. At the age of 12, he was married to Rajvanshi Devi.

Dr. Rajendra Prasad was a brilliant student. He stood first in the entrance examination to the University of Calcutta, and was awarded a monthly scholarship of Rs. 30. He joined the famous Calcutta Presidency College in 1902. Here his teachers included the great scientist Jagdish Chandra Bose and the highly respected Prafulla Chandra Roy. Later on he switched from Science to Arts and completed his M.A. and Masters in Law. Meanwhile, in 1905, Doctor, Rajendra Prasad was initiated into the Swadeshi Movement by his elder brother Mahendra. He also joined the Dawn Society run by Satish Chandra Mukherjee, and Sister Nivedita.

The arrival of Mahatma Gandhi on the Indian national scene greatly influenced Dr. Rajendra Prasad. While Gandhiji was on a fact-finding mission in Champaran district of Bihar, he called on Rajendra Prasad to come to Champaran with volunteers. He was greatly impressed by the dedication, conviction and courage that Gandhiji displayed. Gandhiji’s influence greatly altered Dr. Rajendra Prasad’s outlook. He sought ways to simplify his life and reduced the number of servants he had to one. He started doing his daily chores such as sweeping the floor, washing the utensils-the tasks he had all along assumed others would do for him.

After coming into contact with Gandhiji, Dr. Rajendra Prasad, immersed himself fully into the freedom struggle. He played a active role during Non-Cooperation Movement. He was arrested in 1930 while participating in Salt Satyagraha. He was in jail when on 15 January 1934 a devastating earthquake struck Bihar.  Prasad was released from the jail two days later and he immediately set himself for the task of raising funds and organizing relief. The Viceroy also raised a fund for the purpose. However, while Rajendra Prasad’s fund collected over Rs. 3.8 million, the Viceroy could only manage one-third of that amount. The way the relief was organized, it amply demonstrated the administrative acumen of Dr. Rajendra Prasad. Soon after this he was elected as the President of the Bombay session of the Indian National Congress. He was elected as Congress President again in 1939 in the following the resignation of Netaji Subash Chandra Bose.

In July 1946, when the Constituent Assembly was established to frame the Constitution of India, Dr. Rajendra Prasad was elected its President. Two and a half years after independence, on January 26, 1950, the Constitution of independent India was ratified and Dr. Rajendra Prasad was elected as India’s first President. As a President, he used his moderating influence silently and unobtrusively and set a healthy precedent for others to follow. During his tenure as President he visited many countries on missions of goodwill and sought to establish and nourish new relationships.

In 1962, after 12 years as President, Dr. Rajendra Prasad retired, and was subsequently awarded the Desh Ratna, the nation’s highest civilian award. He spent the last few months of his life in retirement at the Sadaqat Ashram in Patna. He died on February 28, 1963.

Previous Bangles On The Ears: Radhika Raman Prasad
Next Dr. Rajendra Prasad was no rubberstamp