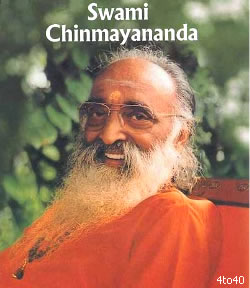 Swami Chinmayananda is counted amongst the most notable spiritual leaders in India. He was considered as an authority on the ancient Indian scriptures, especially the sacred Bhagwad Gita and the Upanishads. He was the founder of the Chinmayananda Mission and also the author of more than 30 books, dedicated to the philosophical belief behind religion. Read this biography on Swami Chinmayananda further to know more about the great leader, his life history, his mission, etc…

Swami Chinmayananda was born as Balakrishna Menon (Balan) in Ernakulam district of Kerala, in 1916. He completed his graduation from the Lucknow University and thereafter entered the field of journalism. Till that time, he felt that he could influence the political, economic and social reform movement through journalism.

Swami Chinmayananda spent forty years of his life in helping others. He opened a number of ashrams, schools, hospitals, nursing homes and clinics throughout the world.

Swami Chinmayananda was selected as the President of Hindu Religion by the Hindu Host Committee in the year 1993. The honor was given to him at the Meeting of the Parliament of World Religions in Chicago. He was also honored for serving humanity selflessly throughout his life at “World Vision 2000,” a conference of religious leaders. Swami Chinmayananda left this world on August 3, 1993 to become one with the Supreme Lord. He died in San Diego, California.

Chinmayananda Mission was founded with an aim, to bring the timeless knowledge of Vedanta closer to people. At the same time, it teaches them to way to attain spiritual growth and contentment.