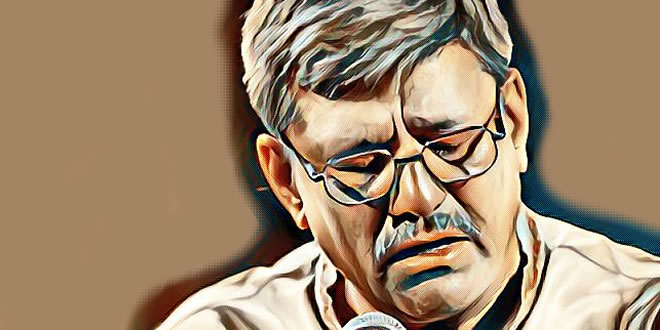 Shri Chandrashekhar Mahajan is a staunch follower of ‘Gharandaj’ or ‘Gharanedar’ concept in North Indian ‘Khayal Gayaki’. In his search of music he had privilege of getting lessons from some of the outstanding musicians of the date.

In the year 1984, Shri. Chandrashekhar Mahajan began his first music lesson with Pt. Ram Mate of Pune, from whom he has received basics of the musical training for nearly 6 years. From the year 1990, Shri. Chandrashekhar was oriented to ‘Gharanedar Gayaki’ under the tutelage of Pt. Ulhas Kashalkar, (Gwalior Gharana Maestro) for about 2 years till Pt. Ulhas Kashalkar’s migration from Mumbai to Sangeet Research Academy, Kolkata.

Chandrashekhar Mahajan was one of the artistes featured on the FEA-curated tribute concert to Pandit Babanrao Haldankar “INTO THE NIGHT”. He concluded his recital with Raag Kafi Kanada. He was accompanied by Mandar Manohar Puranik on tabla and Pravin Kaslikar on harmonium. Tanpura and vocal support was provided by Amol V Ghode.

Shri Mahajan has been regularly broadcasting from Prasarbharati (Pune Akashwani) in B+ Grade since 1998.