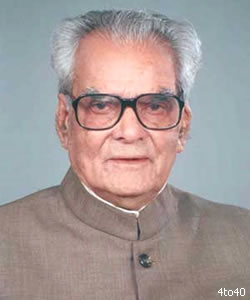 Bhairon Singh Shekhawat was the 11th Vice-President of India. He served in that position from August 2002, when he was elected to a five-year term by the electoral college following the death of Krishan Kant, until he resigned on July 21, 2007, after losing the presidential election to Pratibha Patil. Shekhawat was a member of the Bharatiya Janata Party (BJP), the leading member of the National Democratic Alliance at the time of election. He served as the Chief Minister of Rajasthan state three times, from 1977 to 1980, 1990 to 1992, and 1993 to 1998.

His father’s name was Shri Devi Singh Shekhawat and his mother was Shrimati Banne Kanwar. He was born in the village of Khachariawas, in the district of Sikar in Rajasthan. He was married to Shrimati Suraj Kanwar and they had a daughter Shrimati Ratan Kanwar who is married to Shri Narpat Singh Rajvi, senior BJP leader of Rajasthan and a former cabinet minister in the Govt. of Rajashan. They have three children Mumal Rajvi-daughter and Vickramaditya Singh Rajvi, Abhimanyu Singh Rajvi-sons.

Bhairon Singh Shekhawat completed high school but was unable to complete college due to his father’s death. He had to support his family. He worked as a farmer and an officer sub-inspector of police. His website lists his favorite pastimes as reading, interacting with people, and extensively touring the State and other parts of the nation. He died on 15th May 2010(aged 87) at Jaipur due to respitory illness.

Bhairon Singh Shekhawat entered politics in 1952. Until 1977, the Indian National Congress won elections in majority of the states in India. Shekhawat always posed a threat to the Congress Party in Rajasthan. In the 1967 elections, the Bharatiya Jan Sangh (Shekhawat’s Party) and the Swatantra Party alliance reached near majority but couldn’t form a government. But in the Janata wave in the year 1977, Shekhawat won with a thunderous landlside victory bagging 151 of 200 seats. After the split in the year 1980, Shekhawat decided to join the Bhartiya Janata Party with a host of his supporters. The Indian National Congress won the 1980 elections due to the split of opposition votes. During the Indira wave in 1984, again BJP lost the election heavily. The Congress managed to win 114 out of the 200 seats in Rajasthan. The opposition was divided, otherwise Shekhawat could have made history. But he did make history later on, in the 1989 elections when the BJP-Janata Dal alliance won all the 25 seats in the Lok Sabha from Rajasthan and won 140 seats in the assembly polls that followed. Shekhawat once again became Chief Minister of Rajasthan. In the next elections, after the split in the alliance, Shekhawat led the BJP to be the single largest party winning 96 seats. Three BJP-supported independents also won taking the tally to 99. Many independents supported the BJP and its final tally was 116. The Congress did its best to stop Shekhawat from forming the government. But due to the support of independents, Shekhawat was able to form the government. In the next elections, in the year 1998, the Shekhawat government lost due to the onion price rise issue. But the BJP bounced back in the Lok Sabha elections in the year 1999, just one year after the assembly polls. BJP won 16 of the 25 Lok Sabha seats from Rajasthan. Shekhawat was elected as the Vice President of India in the year 2002, when he defeated the opposition candidate, Sushil Kumar Shinde by a margin of 149 votes out of the 750 votes polled.

In July 2007, Shekhawat fought the Presidential election as an independent candidate backed by National Democratic Alliance as a popular Presidential candidate next to Dr. APJ Abdul Kalam; but lost to the United Progressive Alliance-Left backed candidate Pratibha Patil. Following his defeat, Shekhawat resigned from the post of Vice-President on 21 July 2007.