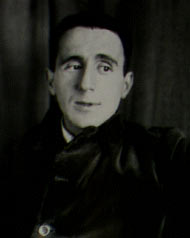 Bertolt Brecht, born on Feb. 10, 1898, died on Aug. 14, 1956, one of the great German poets and playwrights, had a key influence on modern drama. As an innovator he advanced such ideas as the “alienation effect,” an attempt to divorce the audience from emotional identification with the play’s characters, presumably preventing them from experiencing catharsis, pity or fear – the Aristotelian requirements for dramatic effectiveness. “Gestic” acting, another Brechtian notion, trained actors to distance themselves from their stage characters, emphasizing stylized action, intonation, and facial expression rather than emotional empathy. These ideas were realized in many of Brecht’s works, first in plays produced in Germany in the 1920s and early 1930s under the generic category of Epic Theater, and later in Brecht’s own theater in East Berlin.

Brecht’s reputation dates from 1922, when his second play, Drums in the Night, won the Kleist Prize, at that time Germany’s chief literary award. With his love of unpretentious forms, for example, his down-to-earth dialogue, and his use of American stereotypes such as the gangster, he foreshadowed the end of Expressionism and the start of the style known as neue Sachlichkeit (“new objectivity”). Primarily, however, Brecht was the very concrete and intelligible poet of what he called the “Dark Times” in which he lived. It was his effort to understand these in Marxist terms that gave compelling unity to his varied work.

The son of a paper manufacturer, Eugen Berthold Friedrich Brecht (he called himself Bertolt) grew up in his Bavarian birthplace, Augsburg, and entered Munich University as a medical student in the fall of 1917. He served briefly as a hospital orderly in his home town. He wrote his first play, Baal, in 1918, and during the revolutionary upheavals at the end of World War I he served on a soldiers’ and workers’ council. Brecht became a dramaturg (theatrical literary adviser) in Munich for two years following the success of Drums. Then he moved to Max Reinhardt’s chief Berlin theater in 1924. Unsuccessful at first at the box office and unwanted as a director, he left after a year to work freelance. In 1927 he began his association with Erwin PISCATOR, another exponent of epic theater. In that year he met composer Kurt WEILL, with whom he wrote what is without doubt his most successful work, The Threepenny Opera (first production, 1928; first film, 1931), freely adapted from John Gay’s 1728 ballad-play, The Beggar’s Opera. A Full-scale opera, The Rise and Fall of the City of Mahagonny, followed in 1930. By then, however, Brecht had become interested in Lehrstucke (teaching plays), and after Weill scored two of these, their collaboration ceased. The music for the militantly Communist The Measures Taken (1930) and The Mother (1932) was composed by Hanns EISLER, a committed communist with whom Brecht wrote all his best-known political songs.

When the Nazis took over in 1933, Brecht and his wife, the actress Helene WEIGEL, left Germany for Denmark, where they lived until the German invasion forced them once again to move. During the period of Scandinavian exile, however, Brecht composed the great poems of his maturity, collected in the Svendborg Poems (1939). Moreover, he returned to large-scale playwriting with Mother Courage and Her Children (1939), The Life of Galileo (1939), The Good Person of Setzuan (1940), and the Resistable Rise of Arturo Ui (1941).

In 1941, traveling by way of Helsinki, Moscow, and Vladivostok, the couple settled for six years in California, where Brecht tried vainly to find work in films. In California he wrote The Caucasian Chalk Circle (1945), as well as some of his finest songs with Eisler: “Hollywood Elegies” (1942), for example. He worked with Charles Laughton on the adaptation and theatrical production of Galileo (1947). That play aside, virtually none of his work was published or produced in the United States during his lifetime.

In 1947, Brecht was interrogated by the U.S. House of Representatives’ Committee on UN – American Activities. Within days, he had returned to Europe. In Zurich (1947 – 48) he wrote his principal theoretical work, the Short Organum for the Theater. After settling in East Berlin in 1949, he devoted his last seven years to directing and training his own company, the Berliner Ensemble.

In West Germany and West Berlin the performance of Brecht’s work was hindered even after his death by his identification with the East German regime, which he had publicly – but not uncritically – supported during the uprising of June 1953. With the publication of his remaining plays and poems, however, the way was clear for him to be read and produced in both halves of the country. Elsewhere, the length of his plays and the size of their casts has restricted them primarily to repertory theaters. But despite their rare appearance on commercial stages such as those on Broadway, Brecht’s works have assumed the status of classics, and his theatrical techniques have shaped the substance and structure of much of modern drama.