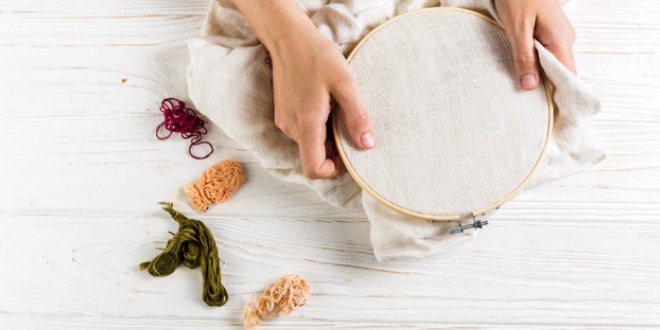 Embroidery in India includes dozens of embroidery styles that vary by region and clothing styles. Designs in Indian embroidery are formed on the basis of the texture and the design of the fabric and the stitch. The dot and the alternate dot, the circle, the square, the triangle, and permutations and combinations of these constitute the design.

Some Prime Embroidery Styles Of India:

Aari work involves a hook, plied from the top but fed by silk thread from below with the material spread out on a frame. This movement creates loops, and repeats of these lead to a line of chain stitches. The fabric is stretched on a frame and stitching is done with a long needle ending with a hook such as a crewel, tambour (a needle similar to a very fine crochet hook but with a sharp point) or Luneville work. The other hand feeds the thread from the underside, and the hook brings it up, making a chainstitch, but it is much quicker than chainstitch done in the usual way: looks like machine-made and can also be embellished with sequins and beads – which are kept on the right side, and the needle goes inside their holes before plunging below, thus securing them to the fabric.there are many types of materials used like zari threads, embellishments, siquins etc.

Aari embroidery is practiced in various regions such as in Kashmir and Kutch (Gujarat).

Practiced by the Lambada gypsy tribes of Andhra Pradesh, Banjara embroidery is a mix of applique with mirrors and beadwork. Bright red, yellow, black and white colored cloth is laid in bands and joined with a white criss-cross stitch. The Banjaras of Madhya Pradesh who are found in the districts of Malwa and Nimar have their own style of embroidery where designs are created according to the weave of the cloth, and the textured effect is achieved by varying colors and stitches of the geometric patterns and designs. Motifs are generally highlighted by cross-stitch.

It is a form of applique in gold thread, used for women’s formal attire. Small pieces of zari ribbon are applied onto the fabric with the edges sewn down to create elaborate patterns. Lengths of wider golden ribbons are stitched on the edges of the fabric to create an effect of gold zari work. Khandela in Shekhawati is famous for its manufacture. The Muslim community uses Kinari or edging, a fringed border decoration. Gota-kinari practiced mainly in Jaipur, utilizing fine shapes of bird, animals, human figures which are cut and sewn on to the material.it is very famous in Rajasthan as well as in many other parts of the world.

Phulkari is the most famous rural embroidery tradition of Punjab, mentioned in the Punjabi folklore of Heer Ranjha by Waris Shah. Its present form and popularity goes back to 15th century, during Maharaja Ranjit Singh’s reign Phulkari also means headscarf, and it comes from the 19th century tradition of carrying an odhani or a head-scarf with flower patterns. Its distinctive property is that the base is a dull hand-spun or khadi cloth, with bright coloured threads that cover it completely, leaving no gaps. It uses a darn stitch done from the wrong side of the fabric using darning needles, one thread at a time, leaving a long stitch below to form the basic pattern. Famous for Phulkari are the cities of Amritsar, Jalandhar, Ambala, Ludhiana, Nabha, Jind, Faridkot and Kapurthala. Other cities include Gurgaon (Haryana), Karnal, Hissar, Rohtak and Delhi. Bagh is an offshoot of phulkari and almost always follows a geometric pattern, with green as its basic colour.