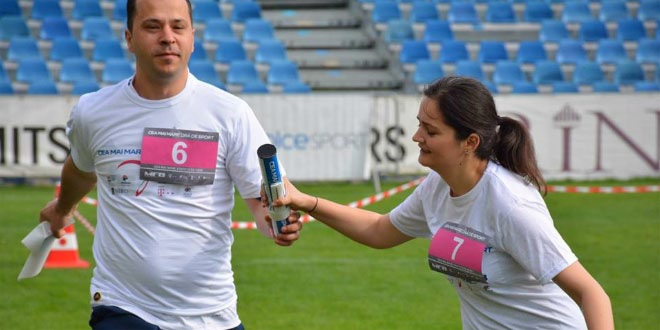 Bucharest, Romania – June 17, 2016 – During the sixth edition of the event “The biggest sport hour” in Romania, part of the national program “Sports is good”, powered by Dolce Sport and supported by Telekom Romania 926 runners of all ages took part in the first relay run on a distance of 100m, which lasted for 12 hours and registered 1540 races, thus setting the new world record for the Most people running 100 metres in a 12-hour relay (outdoor).

Photo: About 926 people ran 100m each, the total distance for the 12 hours being of 154 km on the Arch of Triumph National Rugby Stadium in Bucharest, Romania.

The Guinness World Records world record for the largest piggyback relay consists of 357 pairs and was achieved at an event organised by Atsugi City’s 60th Anniversary Executive Committee (Japan) at Atsugi Ogino Athletic Park, in Atsugi, Kanagawa, Japan, on 21 November 2015.

Guinness World Records also recognized the world record for the fastest time to complete a 4 x 100 m (328 ft) relay backwards; it is 62.55 sec. The team members were Gene Allen, Sebastian Krauser, Stefan Siegert and Roland Wegner (all Germany). The record was set at Neustadt a. d. Waldnaab in Germany, on 11 August 2007.

“We are happy that The biggest sport hour has become a tradition long awaited for by sports lovers. It is an event which Telekom Romania supports with enthusiasm and which gives us the opportunity to get involved in more humanitarian causes, besides promoting a healthy lifestyle”, said Ruxandra Voda, Communication Director, Telekom Romania group of companies.

The event was organized by Telekom Romania and Smart Atletic Association, in partnership with Dolce Sport, COSR, Ciuc Natur Radler and Aqua Carpatica.

The President of the Romanian Olympic and Sports Committee, Alin Petrache, and the former fencing world champion, Laura Badea, supported Telekom’s campaign “Sports is good”, and afterwards talked to Dolce Sport about the event “The biggest sports hour”, from June 4th, organized in partnership with ROSC.

“It is good to work out every day, for 20, 30, 40 minutes, depending on how long each of us can. It is a beautiful initiative”, said Alin Petrache.

“Sports is good and I couldn’t miss out. I consider it is good to work out, because it makes you feel good, you socialize with young people, it contributes to your state of mind and mental wellness”, Laura Badea also stated.