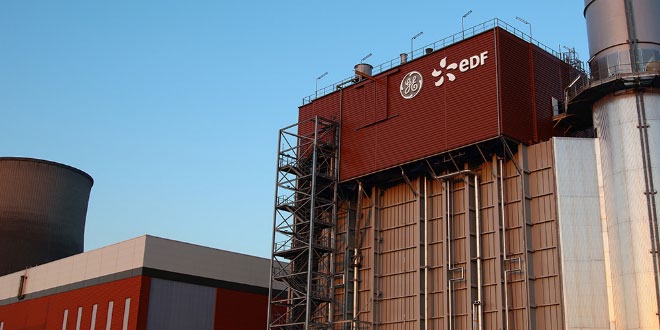 Bouchain, France – June 29, 2016 – GE (NYSE: GE) and EDF officially began operation of the first ever combined-cycle power plant equipped with GE’s HA turbine in Bouchain, France, launching a new era of power generation technology and digital integration; GE also announced that the company has been recognized for powering the world’s most efficient combined-cycle power plant based on an achieved efficiency rate of up to 62.22% at the Bouchain plant.

Photo: GE and EDF have achieved the extraordinary – world’s most efficient gas power plant, capable of achieving 605MW of output at 62.22% efficiency. Enough to power the equivalent of more than 680,000 French homes.

The Guinness World Records world record for the Continuous power plant operation was set by Stanwell Corporation’s Unit 4 at the Stanwell Power Station, Queensland, Australia, which operated continuously from 8 September 1999 to 16 August 2002. This gives a total continuous operation time of 1073 days 1 hour.

Guinness World Records also recognized the world record for the most efficient combined cycle power plant; it achieved 62.22% efficiency, powered by General Electric (USA) and operated in Bouchain, France, as verified by Bureau Veritas on 28 April 2016.

In addition to achieving unprecedented levels of efficiency, GE’s HA gas turbine delivers more flexibility than ever before, capable of reaching full power in less than 30 minutes.

This helps pave the way for greater use of renewable energy by allowing partners to respond quickly to fluctuations in grid demand, integrate renewables onto the grid and adapt quickly to weather changes.

With a generating capability of more than 605 MW, the Bouchain plant will generate the equivalent power needed to supply more than 680,000 homes. In addition, the HA compressor flows air at a rate that could pump up the Goodyear blimp in 10 seconds, and the tip of the last blade in the 9HA.01 moves at 1200 mph/1931 kph — 1.5 times the speed of sound.

“Today is an important milestone in our industry, one that would not have been possible without the hard work and dedication of the many GE and EDF employees across the world who are committed to a future of increased energy efficiency,” said Joe Mastrangelo, president and CEO of Gas Power Systems for GE Power.

“By tapping into the broader GE Store, we are able to collaborate on these initiatives and bring together the right hardware and software tools, as well as people to deliver these results.”