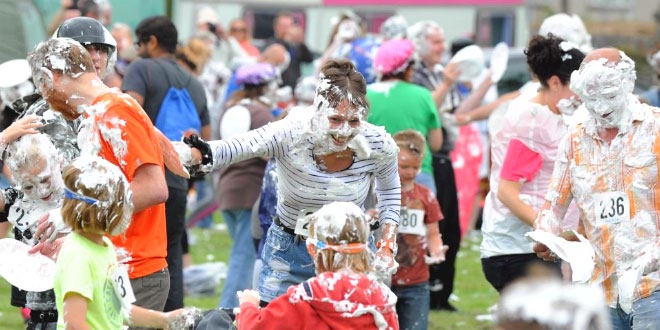 London, UK – June 23, 2016 – Around 1,186 attendees at Another Fine Fest in Ulverston participated in the world’s largest shaving-cream pie fight; the group threw nearly 3,000 pies measuring about 6.4 inches for one minute, thus setting the new world record for the Largest shaving cream pie fight.

Photo: Ulverston set a new Foam Pie Fight World Record with around 1,186 people taking part in the event, beating the previous record of 869.

Guinness World Records also recognized the world record for the largest water balloon fight consisted of 8,957 participants and was achieved by Christian Student Fellowship at the University of Kentucky (USA) in Lexington, USA, on 27 August 2011. 175,141 water balloons were used during the fight.

“We were out to put smiles on people’s faces,” event co-organizer Jennie Dennett told the North-West Evening Mail.

“Hearing that roar when everyone went into that ‘foam-ageddon’ was brilliant. It was a beautifully happy moment.”

The event was part of a phenomenal day of festivities for Another Fine Fest to celebrate the birthday of one of the town’s most famous sons, Stan Laurel.

The number of attendees recorded by the turnstiles exceeds the previous Guinness World Records world record of 869 at the Big Fun Flan Fling event in Belfast in 2015.