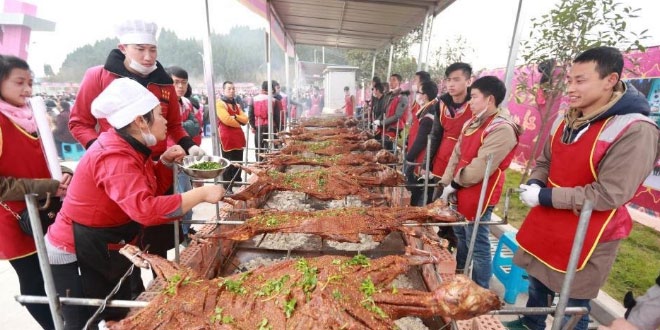 Beijing, China – January 28, 2016 – Some 2,530 kg of roast lamb was served to over 4,000 people at a meal in Jianyang City of southwest China’s Sichuan province, setting a new world record for the Largest serving of roast lamb.

The Guinness World Records world record for the largest serving of roast pork weighed 4,045 kg (8,917.7 lbs) and was achieved by Calata Corporation (Philippines) in Quezon City, Philippines, on 8 November 2015.

Despite the freezing cold weather, over 4,000 people flocked to the city and sat around a large number of tables, waiting for the lamb to be served.

More than 200 seasoned lambs, each weighing around 12.5 kg, were roasted on the grill racks for three hours.

The activity was organised by a local online retailer, who offered 200 heads of lamb for roasting to accommodate the more than 4,000 people in attendance, according to China News Service.

The challenge ended successfully half an hour later with the final result of 2,530 kg eaten.